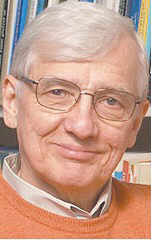 A writer with strong connections to Letcher County will be inducted this week as Kentucky Poet Laureate for the 2009-2010 term.

Gurney Norman, who attended the Stuart Robinson School near Blackey, will be formally inducted at a public ceremony and reception in Frankfort on Friday (April 24) in the Capitol Rotunda.

Norman’s first novel, “Divine Right’s Trip” was originally published in the margins of the “Last Whole Earth Catalog,” which sold two million copies worldwide. “Divine Right’s Trip: A Folk Tale” was subsequently published by Dial Press and Bantam Books in 1972 and Gnomon Press in 1990. Other fiction Norman has published includes “Book One From Crazy Quilt: A Novel in Progress,” (Larkspur Press, 1990) and “Kinfolks: The Wilgus Stories,” (Gnomon Press, 1977). His recent fiction has appeared in “Appalachian Heritage” magazine.

After working for The Hazard Herald newspaper, Norman studied writing at Stanford University as a Stegner Creative Writing Fellow. Other Kentucky writers who went to Stanford in that era include Wendell Berry, James Baker Hall and Ed McClanahan. Norman lived in the San Francisco Bay area from 1967 to 1979 when he returned to Kentucky to join the English Department faculty at the University of Kentucky. Presently the Director of the University of Kentucky Creative Writing Program, Norman will soon complete his 30th year teaching at the university.

Norman will be among several writers offering free workshops at the 13th annual Spring Writers Conference at Hazard Community and Technical College on Friday, May 1.