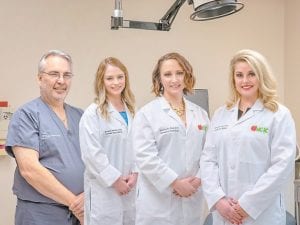 What can you do to prevent invasive cervical cancer?

Have a pap test. A pap is a simple, quick, and painless test done at a doctor’s office. The American Society for Colposcopy and Cervical Pathology recommends all women ages 21 to 65 have a pap test done at least every three years, as long as there is no history of a previous abnormal pap. MCHC in Whitesburg has two OBGYNs and two midwives that offer cervical cancer screening pap tests. Talk with your provider about what screening recommendations are right for you.

After the development of the pap test in the 1950’s the incidence of cervical cancer deaths decreased by 60 percent, however, women are still dying from cervical cancer largely due to non-compliance with recommended pap screening guidelines. Routine screening and early diagnosis allows for better outcomes and higher survival rates. A simple exam could save your life. Call 606-633-4871 to schedule your appointment today.