Chair ended up on display during 1964 World’s Fair

Prototype to be on display in Neon and Whitesburg during festivals 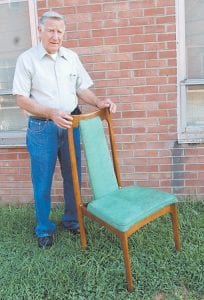 Woodworking expert Willie Spangler poses with the prototype of a chair he made that was shown at the 1964 World’s Fair.

Growing up in Neon, Willie Spangler had an interest in furniture manufacturing at a young boy.

Spangler didn’t understand why geometry was important in high school, but as soon as a teacher told him that a good understanding of geometry is needed for making furniture or building houses, he studied the subject harder.

At 15, Spangler moved to Indiana to find a job. He enrolled in night school and worked in Indianapolis, Ind., at the Indiana Baking Co., which was on the same street as a furniture factory.

“That’s what I always wanted to do was make furniture,” said Spangler.

He was hired at the furniture factory in Indianapolis to run a Bell 100 boring machine to make frames.

Spangler took a job at a glove factory in Louisville, but didn’t give up on working at the furniture plant. He eventually went to the employment service and explained that he wanted to work at Kroehler. One opening was available. The furniture plant was looking to hire someone to run a Bell 100 boring machine.

Spangler said he told the man who was hiring that he knew how to run a boring machine.

“He said, ‘You come with me. When we pass that machine, you point it out,”’ said Spangler.

He spotted the Bell 100 boring machine and Spangler finally was hired to work at Kroehler.

“I learned to run pretty much all the equipment in the plant,” he said.

By 1964, Spangler had a pattern making job at the factory.

“I would take the blueprints from the draftsman and I would actually make a chair,” said Spangler.

“Then I had to make the patterns, jigs and fixtures to manufacture the chair in the plant.”

Spangler moved back to Neon in the winter of 1964 with a notion to set up his own furniture plant here.

“I loved my job, but I wanted to come home more,” he said.

He said most of the wood he worked with in Louisville came from here.

“They called it pecan, but it’s actually hickory from southeast Kentucky,” said Spangler.

Instead of starting up a factory, Spangler developed a kitchen cabinet business called Spangler Woodworking. He made 4,000 beach chairs for Emerald Beach Service in Destin, Fla. He also made a dozen futon samples for an individual in Tupelo, Miss., to display at a furniture show.

Spangler didn’t find out until 1969 that he had made a prototype of a chair that was displayed at the 1964 New York World’s Fair. He was in Louisville visiting Nick Ungaro, the man who designed the chair. On the wall in Ungaro’s office was a photo of a furniture display at the world’s fair. Spangler recognized the chair he had made.

“I hadn’t thought much about it,” said Spangler. “That’s what we did. We made furniture to sell to large furniture stores.”

Spangler isn’t sure why he kept the prototype chair for 50 years.

“I didn’t think that chair was beautiful,” said Spangler. “It was never one of my favorites.”

His prototype chair will be on display at Letcher Flower Shop September 12 and September 13 and at Bella Home Furnishings in Whitesburg during the Mountain Heritage Festival.

“Since New York is making a big deal of it, I think it is pretty interesting,” said Spangler.

Spangler hasn’t given up his interest in manufacturing.

“I would like to teach younger people how to manufacture chairs in a fashion that they could make money, add employees and maybe start factories,” said Spangler.