Chamber cites 5 for service in county 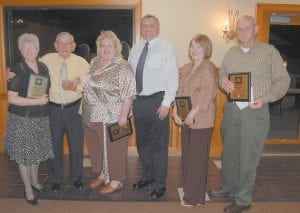 The Chamber’s “Unsung Heroes” awards were presented at a reception held Sept. 9 at Pine Mountain Grill in Whitesburg. The recipients were selected from nominations submitted by the public.

Award winners are listed below in alphabetical order:

“She is hardworking,” said Perry. “She is blunt. She is even known to be rowdy.”

For at least the past five Christmases, Banks has bought or made lap throws for every resident at Letcher Manor Nursing Home who stayed in the same wing as her father, Doug Banks, who recently died.

On her days off from work, Banks takes her neighbors, a brother and sister, to the grocery store and pharmacy. 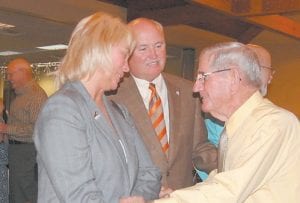 “During this past winter, the brother was hospitalized, and Doris, who isn’t an animal lover, managed to take care of the cats and chickens,” said Perry. “She also chopped wood for the sister to burn in the heating stove, their source of heat.”

Banks gives balloons to children who shop with their parents at Food City. She also helps children fund-raise by collecting orders for Girl Scout cookies or donuts.

A co-worker of Banks couldn’t find a jacket with a horse on the back of it for her child and Banks made the child a jacket.

“She isn’t paid for any of these things she does, she just does it from the kindness of her big heart,” said Perry.

“I don’t do anything to get recognition but thank you,” said Banks. “I want to thank my mom because she is the reason I am the way I am.”

• Paul Thomas Greer, who is retired from Beth-Elkhorn, was nominated for an “Unsung Hero” award by Jenkins Mayor D. Charles Dixon.

Greer, a son of Conley and Sarah Jane Mullins Greer, served in the Air Force for four years including the Korea War.

“Paul Greer is one of the most visible, yet low profile, civic workers in Jenkins, said Dixon. “Anytime there is a meaningful project to be undertaken you will find him there. He willingly lends his talents most anytime he is called.”

“Because of his work and the work of the committee, more than 20 eyesores have been removed from our community,” said Dixon.

Greer is a member of the beautifi cation committee and he helps maintain the flower gardens on Main Street in Jenkins.

He is the groundskeeper of the Greer family cemetery at No. 3 Hollow.

Greer is an avid golfer who works one day a week at Raven Rock Golf Course to earn his club membership.

“Her passion to make Letcher County a better place to live in has been her mission and what a mission it has been,” said Tidal. “Her memberships to many organizations, her contact with people and her tireless efforts have produced many completed projects.”

In 2000, the lease was lost for the Jenkins Public Library and Ladd contacted TECO to donate land for a new location for the library.

“The beautiful Jenkins Public Library is a testament of Jeanette’s dedication and efficiency,” said Tidal. “We are so lucky that we have a Jeanette in our midst. She has truly made Letcher County a better place.”

Isaac spent 28 years working in the Letcher County School System. He was a classroom teacher for 17 years at Beckham Bates Elementary School. He served one year as a district-wide technology teacher and was a principal at Martha Jane Potter Elementary School for one year.

“During his teaching career at BBES, Tex took many things upon himself to ensure that his students were successful and that they had a chance to participate in after school functions,” said Smith. “He volunteered to stay after school many days without pay to tutor kids in math and allow them to work on their math portfolios so they could be proficient in math.”

“He even took some of his football players home on the weekends with him and his family because the boys needed a male role model in their lives,” said Smith.

Isaac taught a fifth-grade student who was about to fail because he had vision problems, which had not been diagnosed.

“Tex recognized this and talked to his mother about getting his vision checked,” said Smith. “This young man was legally blind and ended up having to go to the Kentucky School for the Blind. Tex drove this student and his mother down to the School for the Blind on a weekend in order for him to get a diagnosis and be successful.”

That student is now a Letcher County social worker.

“This goes to show that Tex truly has a heart for his students and wants them to be successful and will do whatever it takes for them to achieve that,” said Smith.

“Tex has not only worked to make his school and students successful, he also has worked to make the county in which we live a better place,” said Smith.

Isaac is the treasurer of the Letcher County Conservation District and has served on the HOMES Inc. (Housing Oriented Ministries Established for Service) board.

• Reva Sergent, who is retired from the Letcher County Area Technology Center, was nominated by Shirley B. Sexton.

Sexton said Sergent has worked on improvement projects since she was young.

She is a member of the Whitesburg Appalachian Regional Hospital Auxiliary. Sergent assists with the Angel Food program at the Whitesburg First Baptist Church. She also helps Shamarra’s Dream Library organize clothes to be given to those who have lost their homes to fires.

“She is always just a phone call away whenever she is needed,” said Sexton. “Reva is an upstanding citizen and a great asset to Letcher County and especially to the Colson area.”