Chamber honors ‘Best of the Best’

The Letcher County Chamber of Commerce has named eight professionals and four businesses as the “best of the best” in the county.

Awards for best of the best, volunteer organization of the year, business of the year, Letcher Countian of the year and a lifetime achievement award were presented during a banquet held Nov. 14 at Pine Mountain Grill. 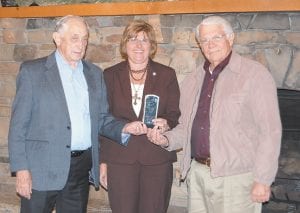 Caudill credited Breeding for being active in civic affairs. In 2012, Breeding helped organize the Agrestic Music and Arts Festival, which raised $7,000 to benefi t the structured classroom for autistic children located at West Whitesburg Elementary School. This past summer Breeding, along with two of his daughters Kennedy and Cassidy Breeding, coordinated a benefit dinner for the Carcassonne Community Center.

Sybil Shell, director of nursing at MCHC, received an award for favorite nurse.

Growing up, Shell wanted to be a nurse.

Tanis Pennington, a math teacher at Whitesburg Middle School, received the most votes for favorite teacher.

Whitesburg Florist was chosen as the best florist. Sisters Lynn Day and Ellie Webb have owned the florist on Main Street for more than 11 years. 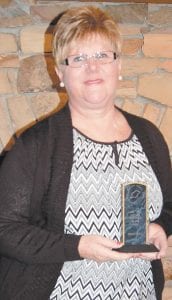 Retired registered nurse Debbie Hogg, of Kona, is the recipient of the Chamber of Commerce’s Letcher Countian of the Year Award. Hogg obtained her Master of Science in Nursing degree from the University of Kentucky.

Rick and Charlene Mason, owners of The Copper Comb in Mayking, received awards for favorite hairstylists.

“We’ve been in this business along time,” said Charlene Mason. “We appreciate our customers. We have a lot of good clients.”

“I’m honored and I couldn’t do it without good coworkers,” said Cunniff.

Pine Mountain Grill received the most votes for favorite restaurant.

Founded in 2003, the commission has been instrumental in trying to get a federal prison built in the county. Cornett said an environmental impact study is being conducted and he doesn’t know of a case where a study was done and a federal prison wasn’t built. 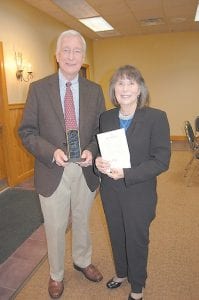 Donna McClure, from U. S. Senator Mitch McConnell’s office, read a letter from McConnell to the planning commission in which McConnell said the commission is making a positive influence on society.

Wings Air Rescue, a company which provides medical helicopter flights and is located at the Gateway Industrial Park in Jenkins, was recognized as the Chamber’s Business of the Year. The Jenkins base opened in 2006.

“We feel like we have one of the most rewarding jobs in the world,” said Will Fritz, Wings base manager.

“Every patient they fly out has a story,” said Whitesburg ARH Community CEO Dena Sparkman.

Fleming-Neon dentist Dr. Sam Quillen Jr. said it is easy to see why Debbie Hogg was chosen as Letcher Countian of the year.

“ Because she dearly loves Letcher County,” said Quillen, who presented Hogg with the award.

Hogg is a retired registered nurse who earned a master of science degree in nursing from the University of Kentucky. Hogg was a nursing instructor at Hazard Community and Technical College for more than 20 years. Sparkman said at least 20 nurses have told her that Hogg is the reason they became nurses.

Hogg was chairperson of a committee which advocated and fundraised for an $ 11 million addition to Whitesburg Appalachian Regional Hospital. The 15,000-square- foot extension includes space for surgery, postpartum, obstetrics and nursery.

“That’s how we were raised was to give and help others if you were able,” said Hogg.

Quillen credited Hogg’s parents, the late Maynard and Evaleen Hogg, for her commitment to her community.

“She is always thinking of people in Letcher County,” said Quillen. “She was trained to be this way from her mom and dad.”

Debbie Hogg said her father, who was a former Letcher County sheriff and coal operator, told her to never start something that you don’t intend of leaving better when you finish.

In 2010, Maynard Hogg received a business achievement and leadership award from the Chamber of Commerce.

“He loved Letcher County and he loved the people of Letcher County,” said Hogg. “I am so glad he instilled that in me and my family.”

Bradley Bentley, who owned Royal Crown Bottling Company of Whitesburg Inc. for 64 years, is the recipient of the chamber’s lifetime achievement award.

Bentley, 98, had a strong work ethic and when the plant still bottled drinks Bentley would show up at the plant at 4 a.m. to fire the furnace so the water would be hot enough to clean and sterilize the glass bottles when workers arrived.

Before Bentley partnered with the late Ray Collins to buy the bottling plant, he owned the Big Block Coal Company on the Little Colly side of Sandlick Mountain. Collins was an Old Regular Baptist preacher and businessman. The two men bought the plant, then located in Neon, from James McAuley and formed The Royal Crown Bottling Company of Whitesburg Inc.

After taking over a plant with an inventory consisting of less than a pallet of the lemon-lime drink Upper 10 and one pickup truck that had been hit in the rear, Bentley sold his coal business in 1948 and he and Collins moved their bottling plant to Ermine where they built a brand new facility with new equipment. Collins sold his share of the business to Bentley in 1965.

In its heyday, the plant produced and bottled RC Cola, Diet Rite Cola, Nehi Peach, Nehi Grape, Nehi Orange, Nehi Root Beer, Upper 10, and RC 100. Between 2,000 to 2,500 cases of 12-ounce bottles and 1,500 to 2,000 cases of 16-ounce bottles of soft drinks were produced each day until 1990, when Bentley decided to stop bottling all products because the market was moving toward plastic two-liter bottles and aluminum cans.

“He is very deserving of this,” said Phillip Hampton, who began working at the plant when he was 16.

In 1960, Bradley Bentley came up with the idea of a well-known billboard that says, “Welcome to Whitesburg, Ky. Population 1,534 friendly people plus two grouches.” People have speculated for years about the identity of the grouches, but Bradley Bentley insists the billboard isn’t referring to anyone in particular. The sign is located on Tunnel Hill at Whitesburg near the back entrance to Whitesburg Appalachian Regional Hospital.

The Bentleys bought large Christmas decorations while attending an RC Cola meeting in Chicago in the 1960s. Santa Claus and his reindeer had been on display near the RC plant for more than 50 Christmas seasons. Last year the decoration was displayed in front of Jenkins City Hall.

The RC Cola plant was one of the first sponsors of “Letters to Santa” on WTCW/WXKQ.