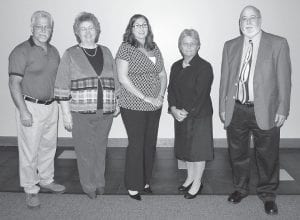 Three woman and one man were honored Monday night by the Letcher County Chamber of Commerce for their work as community volunteers. An Isom man received the 2011 Businessman of the Year Award.

The Chamber’s “Unsung Heroes” awards were presented at a reception held Oct. 10 at Pine Mountain Grill in Whitesburg. The recipients were selected from nominations submitted by the public.

Award winners are listed below in alphabetical order:

• Rachel Breeding, social services case worker and education coordinator at Whitesburg Appalachian Regional Healthcare (ARH), was honored for her contributions to the hospital, her church and community organizations.

“She is always in service to others,” said Whitesburg ARH Community Chief Executive Officer Dena Sparkman who nominated Breeding for the unsung hero award.

Breeding, of Whitesburg, has been a member of the Graham Memorial Presbyterian Church in Whitesburg for 41 years. She sings in the choir and is an ordained deacon and elder.

Breeding has been a member of Beta Sigma Phi Sorority since 1980 and is a charter member of the domestic violence council. She is a past member of the Whitesburg Woman’s Club and the Southeast Community College Education Foundation.

Sparkman referred to her as the queen of kindness.

“Kids are attracted to Rachel with an instinct that says I am safe and I am loved here,” said Sparkman. “They know she will always greet them with a smile and hugs. She keeps their secrets and provides unconditional support.”

Breeding has been employed with ARH since 1982 helping families adjust to reality with new diagnosis, Sparkman said.

“It takes an amazing individual to sit with a grieving family,” said Sparkman. “Her presence is a comfort beyond what words are able to provide.”

Breeding has also been instrumental in numerous ARH projects including the Build Heal Thrive expansion project.

“Rachel serves as the glue and oil,” said Sparkman. “As the glue she holds others together. As the oil she uses her skills to make the way easier for others.”

Breeding thanked her friends and family for their support. She took a moment to remember her late parents.

“My parents and grandparents taught me the importance of faith in God, dedication to our country and to love people,” said Breeding. “That is one of the life lessons I have learned.”

• April Damron Charles was honored for her role as coach of the Jenkins High School softball team.

“We have a person in Jenkins who has dedicated herself to shaping young girls into outstanding athletes and caring individuals,” said Jenkins Independent Schools Supt. Debbie Watts who nominated Charles for the award. “She identifies talent early on then recruits, trains and nurtures the children in one of the most positive manners I have ever observed in a coach.”

Watts said Charles is a mentor, friend and role model to girls who attend Jenkins High School. She said Charles has an attitude of instilling confidence, sportsmanship and developing girls who bond as teammates and friends for life.

“She’s tough,” said Watts. “She demands exemplary behaviors, but the girls do anything she asks willingly.”

Charles gets out on the ball field and demonstrates technique and pushes her players to succeed, said Watts.

“She knows what she is doing and it is evident as her expertise is reflected within her players,” said Watts.

Several of her players have received college scholarships.

“I don’t think I have ever heard so many nice things said about me,” said Charles. “I don’t really feel like I am a hero. I just do something I love.”

• Connie Hall Fields was recognized for her volunteer efforts as a member of the Mountain Heritage Festival Committee.

Fields has served as a member of the festival committee for 29 years and is one of two remaining founding members.

“She has invested countless hours to ensure that the Mountain Heritage Festival remains one of the largest festivals in the state,” said Lee Anna Mullins, chairperson of the festival committee. “She began working with the festival in its early stages and has helped it grow from a small tent on Railroad Street to the large tents, 17 vendors, their own stage and building that is now located on the bypass exit ramp in Whitesburg.”

Mullins, who resides in Perry County, spends Monday through Sunday of festival week in Whitesburg. Before retiring as a social worker in Letcher County, Fields would take vacation days to help out with the festival.

“It was Connie’s enthusiasm that encouraged me to join the committee 20 plus years ago,” said Mullins. “She continues to encourage new members as the committee thrives to make our festival one of the best in Kentucky.”

Fields also helped start the Letcher County Food Pantry and the seed program. She became the first female elder of the Isom Presbyterian Church, and volunteers with Letcher County Relay for Life.

Fields said even though her house is in Perry County, Letcher County will remain her home.

She encourages other people to volunteer in their communities.

“If you’re not doing community service, you need to be,” said Fields. “There is always a need.”

• Eugene Meade, retired campus director of Southeast Kentucky Community and Technical College, was recognized for his involvement in community service.

Meade, of Whitesburg, began community service when he became involved with the Neon Jaycees after graduating from Eastern Kentucky University in 1972. He eventually served as president of the Neon Jaycees.

Meade, who was named a Kentucky Colonel for his community involvement, coached Little League basketball, women’s softball, men’s softball and served as chairman of the Letcher County women’s and men’s softball league.

He has served as a member of the Whitesburg ARH advisory board, Whitesburg Rotary Club and the Letcher County Education Foundation. He was a former chairperson of the 21st Century Learning program in Letcher County, and served on a transportation committee for the Kentucky River Area Development District (KRADD).

Meade was on the board of directors for Kentucky River Community Care and has served as chairperson of the community action council. He is vice chair of the Whitesburg Housing Authority.

He was chairperson of a drug prevention program that provided funding for after school and community programs for Letcher County and Jenkins school systems.

“You certainly don’t get into working for the community for recognition,” said Meade. “I think of the community as my second home.”

In addition to the four unsung hero awards, the Letcher County Chamber of Commerce presented a business achievement award to Tim C. Breeding, owner of Breeding’s Plumbing and Electric of Isom.

Breeding received a diploma from the Letcher County Vocational School in electricity. After a five-year apprenticeship at Adams Plumbing and Heating, Breeding started his own business in 1977 when he formed Breeding’s Plumbing and Electric. He started out with one employee and has increased his staff to 30.

Breeding built a car wash in 1982 and later a building rental property and storage facilities. He built Mountaineer Kartway in Isom.

Breeding has been a member of the Isom Day Festival Committee for 21 years, while serving as president for the last 12 years.

“Tim has made the annual festival a huge success with the rodeo and entertainment brought to the Isom community each year,” said Joe DePriest, president of Letcher County Chamber of Commerce.

In 1999, Breeding became a honorary Kentucky Colonel, which is the highest title of honor bestowed by the governor.

“We expect more than a lot of people think is possible,” said Breeding. “We chose to live here. We chose to make this a better place.”