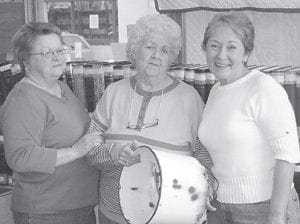 RECOVERED — Bessie Shepherd (left) and Rissie Mullins (right) recently made a special presentation of a found object to Georgia B. Helton of East Jenkins.

Some people just don’t need a last name. So it is with Georgia Belle Helton, age 83, from East Jenkins who is affectionately known to all of her friends as Georgia B.

You may have seen her driving on the highway, barely peeping over the steering wheel as she moves along and not letting any moss grow under her wheels. You’ve probably seen her chauffeuring one of her friends to a doctor’s appointment or to the grocery store or just out for a Sunday afternoon spin.

Georgia B. grew up at Marshall’s Branch off old U.S. 23 just below Jenkins on the Letcher County/Pike County line. She attended Marshall’s Branch School and Dorton High School. She was always a very outgoing person and loved to dance.

Once when she attended a dance in Pike County she met a handsome young square dance caller named Gardner Helton. He was a native of Pound, Va., and worked for Consolidation Coal Company. On the weekends he loved to go to Pike County to call square dances. Both had a love for life and had many friends.

They hit it off right away and began dating. They got married soon thereafter and set up housekeeping in East Jenkins in 1943. She still lives in the same house in the neighborhood know as No. 3.

Throughout the coal camps built by Consolidation Coal Company, many neighborhoods were named for the nearest coal mine (in this case, No. 203 Mine). Gardner worked for Consol and later for Beth-Elkhorn Corporation. The gregarious Georgia B. got acquainted with all of her neighbors at No. 3 right away.

One of her best friends was a young girl named Reba who lived up on the hill at No. 3 Hollow. Reba was a few years younger and unmarried. When Reba got married, Georgia B. hated to see her move away. She had married a young man from Whitesburg and they moved in with her in-laws who lived on Tunnel Hill until they could get on their feet and find a place of their own. Georgia B. and Reba still maintained contact by mail, and they still found time to visit each other occasionally. Through a chain of events Reba moved to North Carolina a few years later, and after all these years they still maintain contact by letter writing and phone calls and by remembering each other’s birthdays and special occasions.

Georgia B. recalls that every time she would go to Whitesburg she would still travel the old road along Tunnel Hill and reminisce about her friend who had moved away a half century earlier. As we talked, she told me of a mystery which began about 15 years ago.

“I was traveling the old road and as I approached Tunnel Hill on my way from Jenkins to Whitesburg, I glanced up on the mountain and saw a white object about three or four hundred feet up on the hillside. It was winter and all of the foliage was gone. It didn’t look any bigger than the top of your hat,” she said to me. “The next time I was down that way I looked for it again but I couldn’t see it because it was springtime and the tree foliage and underbrush hid it. Every time I went by there I looked for it.

“Through the years it kept moving down the hill closer to the highway. I could see it in the winter, but it would disappear again when trees got green. I mentioned it to my friend Reba several times when we talked by phone or wrote letters and we finally concluded it must be an old enamel pot of some kind and most likely one that Reba’s mother-in-law had thrown away back in the 1940’s or 50’s.”

They recalled the many home appliances, utensils and cookware they used during that era. As they reminisced, they recalled the big pots of roasting ears they cooked on the woodburning kitchen stove, and the big pots of fresh green beans with potatoes cooked in them. They remembered that the enamel buckets, pans and dippers and of course the slop jars (chamber pots) were all coated with the glass enamel to prevent the metal from rusting. Once the enamel chipped it was just a matter of time before the utensil had to be discarded.

“‘Whatever that object is, it has to be an antique and I would love to have it,’ I told my friend Reba.

“About five years ago my daughter Rissie was visiting me from Lexington. We went out for a ride and I asked her to get off the main road to Whitesburg and go by Tunnel Hill. ‘What on earth for?’ she asked me. It was a bright January day and I pointed out to her the old pot up on the hill. I explained that I had been watching it for years, and it had moved farther down the hill each year. I told her the story about my friend Reba and the connection. I was convinced that it had belonged to Reba’s motherin law, Hannah, and I longed to get it and keep it not only because it was an antique but because it was a memento of our friendship and that era.”

Rissie recalls that each time she visited her mom she always wanted to drive by Tunnel Hill to see if that pot was still there. It kept creeping closer and closer to the highwall above the highway and they began to worry that it would be lost or someone else might see it and get it before they could retrieve it. They just couldn’t figure out how to climb up there and get it.

Last summer Rissie came back home for a visit and brought her friend, Ginger Clark, with her. Rissie called her friend, Bessie Shepherd of Whitesburg, and they rode around Letcher County to give Ginger, a Lexington native, the grand tour. Ginger especially enjoyed the spectacular view from Pine Mountain. On the way back to Bessie’s home in Whitesburg, Rissie took the scenic route by Tunnel Hill and told them the story of the enamel pot which her mother wanted so badly. Rissie got a little choked up and her eyes got glassy when she told her friends how much that old pot meant to her mother and that she had no idea how she could ever get up on that highwall and get it for her.

“You want it real bad don’t you,” said Bessie.

“Of course I do. I would give anything to get that for my mom,” said Rissie quickly.

“Write it down girl,” said Bessie, with a mischievous smile.

Rissie was smiling and laughing now at the thought of the adventure.

“Bessie, how in the world are you going to get that pot off the highwall?” demanded Rissie. “That is too dangerous for you to climb up there.”

“You don’t worry about that,” said Bessie laughing.

A few weeks later Georgia B. again drove the old road by Tunnel Hill and glanced up on the mountain for the enamel pot. It was gone. She hit her brakes and looked again hoping she had just overlooked it. “I guess I’ve waited too long to get it,” she thought. “I guess the wind blew it down into the ditch and the highway crew picked it up for garbage.” She thought about stopping her car and getting out to look in the ditch but concluded that it was too dangerous. She drove on slowly because she was a little mad at herself for not making more of an effort to get the pot before it was lost.

When Bessie called her friend and told her she had gotten the old pot, Rissie screamed, “You didn’t!”

“How in the world did you do that?” Rissie demanded.

Bessie laughed and said, “Well, I had a little help. When I told my son, ‘Bubby’ and my grandson, Richard, they gladly accepted the challenge. They got some kind of a tool with an extension handle and climbed up there and reached with that tool and got it. They just stopped their truck right there on the highway and turned on their emergency flashers and climbed up there and got it. It might never have fallen off the highwall though; there was a hole rusted in the bottom and a little seedling had grown up though the hole. All of the traffic came to a standstill as they wondered what possessed those two young men to climb up on the highwall. But, here is the funny part,” said Bessie. “You know your mom always thought it was probably a big cooker. Well I hope she won’t be too disappointed; it’s a chamber pot.”

“Yes, a slop jar!” They both had a good laugh then began planning how they could surprise Georgia B.

They thought about giving it to her as a Christmas present but couldn’t seem to get their schedules together. Recently when Rissie was visiting her mom she called Bessie and they hatched a plan to get Georgia B. to go to the Festival of Quilts at the Harry M. Caudill Memorial Library in Whitesburg. Bessie was one of the organizers and spent many hours there meeting the hundreds of guests who came by. The girls were in no hurry as they enjoyed the quilt show and the reunion. Georgia B. praised the craftsmanship and artistry of the 50 plus quilts, then they retreated to a private room for some refreshments.

“Georgia B., I didn’t get to see you at Christmas so I got you a little gift,” said Bessie, as she handed her a package.

Georgia B. opened the package slowly and gasped. She immediately recognized the old pot and smiled.

“Honey, you couldn’t have gotten me anything in this world that would have pleased me more,” said Georgia B. as she gave Bessie a hug.

The girls chatted another hour as Georgia B. talked about the many wonderful friends she has made through the years. “Children, I have lived a wonderful life. I have truly been blessed beyond measure.”

As they journeyed back to East Jenkins, Georgia B. held the gift in her lap and said softly to her daughter, “I guess now I don’t have to worry about looking for my white pot; I just can’t believe it. I’ve got the pot, but who knows there could be another one up there working its way down the mountain.” They had a good laugh as they glanced up at the hillside where the old pot came from then they drove a few miles without conversation. As they approached the old homeplace at East Jenkins Georgia spoke in a melancholy voice, “I can’t believe anyone would think enough of me to get me this gift that I’ve been wanting for 15 years.”