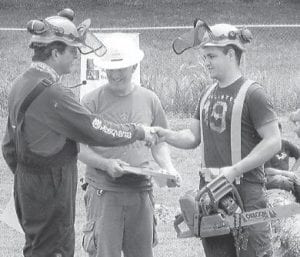 Eighteen-year-old Brandon Gibson of Big Cowan, (front, right) is a graduate of Master Logger training and Letcher County Central High School. He competed for the first time July 11 in the Southern Appalachian Logger’s Competition in Kingsport, Tenn., where he won first place out of 12 finalists including his father. He was the youngest competitor. He is the son of Denise Spangler of Big Cowan, and Johnny Gibson of Sandlick, who owns Gibson Logging. He is the grandson of “Tootsie” and Glen Ratliff of Cowan, and Rose and Ulysses Gibson of Tennessee.