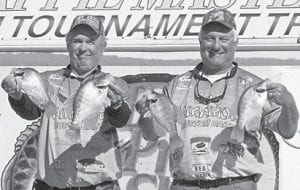 — Pro anglers Bill Braswell of Hazard and Dan Dannenmueller of Watumpka, Ala., have again won the Crappie Masters Angler Team of the Year national points championship. The Gary Yamamoto Custom Baits pro staff team had repeated with a 2012 victory following its win in 2011. The team secured its victory at an event at Truman Lake, Mo. The team had been in the top 3 since February, and moved into first place at the Lake Dardanelle, Ark., tournament. Braswell and Dannenmueller will be crowned as the Angler Team of the Year at Crappie Masters Classic national championship tournament at Columbus, Miss., in October.