NASCAR should revamp schedule and race in April 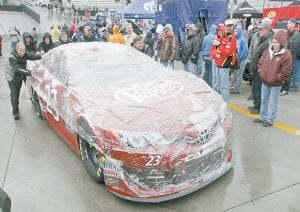 The crew for driver Alex Bowman (23) rolled his car with the rain cover on into the pit area prior to the NASCAR Sprint Cup series auto race at Bristol Motor Speedway on Sunday. (AP Photo/Wade Payne)

Of the many things NASCAR can’t control, the weather is at the top of the list.

NASCAR can’t make it be warm and sunny every race day and NASCAR can’t stave off rain showers or cold fronts.

What NASCAR can control is the schedule. After rain delayed a second Sprint Cup race in this four-week-old season, it’s time to consider some tweaks.

The Daytona 500 will always be the season-opening race, and nobody is suggesting that should change. But a rain delay of nearly six hours last month pushed the bulk of the race into prime time for the second time in three years.

There’s something electric about running NASCAR’s version of the Super Bowl under the lights, and the race pace showed the drivers felt it, too.

So just go ahead and make the Daytona 500 a night race. It may still rain on race day, but Fox won’t be forced to fill hours of programming waiting for it to clear.

NASCAR then headed west to Phoenix, extended the swing a week with a stop in Las Vegas, then headed back home. Next up on the schedule was Sunday’s stop at Bristol Motor Speedway in Tennessee, once one of the most coveted tickets in NASCAR.

The track has been one of the hardest hit since the 2008 economic downturn. A streak of 55 consecutive sellouts was snapped in 2010 and attendance for the spring race has dwindled every year. Some fans blamed a 2007 track reconfiguration for ruining the racing, and there were complaints about high hotel rates.

Both reasons are valid and true. But overlooked is that Bristol’s first race of the season has slowly inched up the NASCAR calendar since 2005, when it went from the sixth race of the season to the fifth stop on the Sprint Cup Series schedule.

That was OK in 2005, when NASCAR had an early off weekend and Bristol’s race date was April 3. But the next year, it was moved to March and by 2011 it was the fourth race of the season.

It’s meant a race date of mid- to late March, and Sunday’s running was the earliest on the calendar Bristol has hosted a race since 2008. Only two were run earlier — in 1976 and 1982, when the race was held on March 14.

Track officials were not surprised when the weather fluctuated wildly all last week, hitting the mid-70s early in the week before plummeting into the 40s when NASCAR rolled into town. The forecast for Sunday’s race called for 100 percent chance of rain — and the two delays added up to more than five hours, with the race finishing deep into the night, under the lights.

“I think the right place for us is mid- to late April, given the weather conditions around here,” Caldwell said this week.

Caldwell readily admits the end result was one of the most stirring spring races the track has ever hosted, one that could make a compelling argument for Bristol to hold all its Cup events at night.

But that wouldn’t work with Bristol’s current race date.

“The thing that people want to look at is the average temperature at the time of the green flag. OK, it might be nice at the time the race starts,” Caldwell said. “I encourage people to look at the nighttime temperature. You look at our fans, more than half come from the Northeast and the Midwest and a lot of them are camping either because of the lack of hotel space or because of the camaraderie. You look at the nighttime temperatures we have in March, and we are just losing so much because it is not appealing to be here and be outside.

“It’s not about rain. You can have rain anywhere. It’s about the cold at night here.”

It was cold Sunday and only a few thousand die-hards stuck it out to the finish. They were treated to a tremendous race, but one that ended under strange circumstances when the caution lights mysteriously triggered right before Carl Edwards took the white flag.

NASCAR vice president of competition Robin Pemberton later said the lights were erroneously triggered when someone — either one of two officials or a photographer — leaned on the switch.

“As the day went on, and the different scenarios of getting up and down, and they were probably pretty cold standing up there all day long, they had bundles of clothes on, so I can only sympathize with the conditions that they were trying to deal with,” Pemberton said.

NASCAR’s official process for changing race dates is through realignment, which would mean Bristol and its Speedway Motorsports Inc. ownership group would be responsible for working out a change with another venue.

“There are so many different dominoes that have to play out,” Caldwell said. “And NASCAR has at times pushed back and told us to work it out with Speedway Motorsports and see if there’s someone to trade with. They are in challenging spot trying to please everyone.”

Indeed, lots of tracks want April race dates because the weather is generally nice. So NASCAR has a tough time juggling all the requests.

But Bristol doesn’t have much to work with in terms of making a swap. There’s only one SMI-owned track, Texas Motor Speedway, scheduled to host a race in April. Texas faces the same weather issues as Bristol so a swap is not possible. But Caldwell would be willing to consider racing on the open Easter weekend if it got Bristol into April, and he’d be willing to consider racing at night after the success this past weekend.

But those aren’t the kind of decisions and deals that the tracks should be figuring out on their own.

NASCAR has thrown tradition out the window on the Chase for the Sprint Cup championship format and on qualifying. The champion will now be decided on a never-before-used system of the first driver across the finish line in the finale.

If everything about the actual ontrack product is up for review and radical change, why is the schedule itself so sacred? Why is NASCAR reluctant to revamp the schedule, change it up a little, offer some variety to the 10 Chase tracks and reward places such as Las Vegas that draw consistently well to its one race per year?

Instead, NASCAR sister company International Speedway Corp. has the season opener, the season finale, six of 10 Chase races and the cutoff race to make the Chase field.

There are solutions for Bristol, but it would require NASCAR to play the heavy. Homestead could be the fourth race of the season. The southern Florida track certainly has the weather to host in March. But that would mean someone else would have to get the finale, and since ISC won’t spend the money to upgrade Phoenix and Las Vegas, an SMI-owned track, wouldn’t be seriously considered, there’s no clear host for a late November spectacular.

Or, NASCAR could add a few more off weekends to the schedule and try some weeknight races. Instead of Easter weekend, maybe Bristol hosts a race on a weeknight before Easter Sunday. Or on a weeknight after the series stops at Martinsville, Va., or between Darlington and Richmond.

It can be figured out by NASCAR, and politics shouldn’t be part of the scheduling decisions.