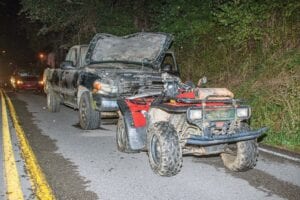 A pickup truck sits against the rear end of a four-wheeler after a crash Friday on KY 805 in Jenkins. The riders of the four-wheeler were injured — one critically — and the driver of the truck, Darrell Wyatt of Jenkins, was charged with driving on a license already suspended for DUI. (Photo by Chris Anderson)

A crash involving a pickup truck and a four-wheeler injured two Jenkins men and resulted in the truck’s driver being criminally charged, with more severe charges possible.

The wreck happened Friday night on Ky. 805 near Brickyard Hill in Jenkins. Jenkins Police Officer Devin Slone said a GMC pickup truck driven by Darrell Wade Wyatt Jr., 41, of Wheaton Hollow, Jenkins, was traveling westbound on Ky. 805 when his vehicle collided with rear end of a four-wheeler driven by Johnny Mac Mullins Jr., 56, of Jenkins. Mullins’s son Johnny Mullins III, 28, of Jenkins, was a passenger on the ATV, which, Slone said, had broken down in the westbound lane of the highway.

Slone said that after the initial collision, Wyatt’s truck pushed the ATV approximately 300 feet, and the vehicles came to rest in the eastbound lane of the highway. Slone wrote in court documents that Wyatt stated he had been driving 55 miles per hour in the 35 mile-per-hour speed zone leading into downtown Jenkins.

Regional Hospital by ambulance. Johnny Mullins III, Slone said, was critically injured, suffering a head injury, as well as other injuries. He was airlifted by Wings Air Rescue to Pikeville Medical Center where, as of press time, he continued to be treated for his injuries.

Slone said Wyatt, who was not injured in the crash, appeared to be under influence of narcotics, displaying constricted pupils and talking with slurred speech. The officer said Wyatt refused field sobriety tests and was transported to Whitesburg ARH for a blood sample, but refused to take part in the blood test.

Slone arrested Wyatt and charged him with driving on a DUI-suspended license, as well as driving without insurance and having expired registration plates. Slone said Wyatt’s registration has been expired since 2013. Wyatt was lodged in the Letcher County Jail and was released Saturday after posting bond.

Slone said he anticipates filing more charges against Wyatt in relation to the crash. He said some of those charges could be felony counts, including assault.

Jenkins has, for several years, been designated as being “ATV-friendly,” and off-road vehicles are common sights on the roadway in Jenkins. Slone said since the city is “ATV-friendly,” he believes the Mullins men were lawfully on the highway in the time leading up to the collision. He acknowledged that off-road vehicle riders are at risk when on roadways.

“When they get on the roads, they put themselves at the same risk of having a collision as drivers in regular vehicles,” Slone said.