Charity was still able to give here despite job losses elsewhere 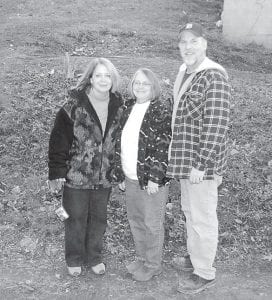 Mary Martin Hendrian, Janet Madden and Jim Hendrian took a break from delivering Christmas presents to needy families on Dec. 17 and posed for a photo in Jenkins. (Eagle photo)

Letcher County native Mary Martin Hendrian has made it her mission to help others in the county where she grew up because she remembers how she received help when she was a little girl. Now Mary Hendrian would like for children when they grow up to give back and help those who need it.

“Our hope is that one day these kids will turn around and help someone in need,” said Mary Hendrian. “That’s our goal.”

Mary Hendrian’s father died when she was three years old, leaving her mother to rear nine children. She moved to Michigan after she graduated high school and married, but always wanted to give back to the community that helped her when she was younger. Mary Hendrian and her cousins, Janet and Henry Madden, created a non-profit organization, Emergency Aid for Children, to make that dream a reality.

Last week, Hendrian and her husband Jim took off work from their jobs in Michigan to deliver food, toys and furniture to 20 Letcher County families.

Mrs. Hendrian was humbled last week when they delivered Christmas presents to a family they had helped almost nine years ago. She couldn’t believe how one teenager remembered them from several years ago and how grateful he was to them.

“He helped unload the trucks,” said Mary Hendrian. “He was just a perfect little gentleman.”

Janet Madden is also proud of the boy’s achievements.

“Just to see that they have come that far and he is a really good student,” said Madden.

Jim Hendrian said the number of people the organization was able to serve this year was cut in half mainly because of the increase in unemployment in the auto industry in Michigan. The Hendrians and the Maddens raise money throughout the year and ask their neighbors and co-workers in Michigan to help buy Christmas presents to bring to Letcher County.

“”A lot of them that help pulled though and made it happen,” said Jim Hendrian.

The Hendrians and Maddens work closely with the Family Resource and Youth Service Centers (FRYSC) in each school in the county to make sure families are given what they need.

Mary Hendrian said she is hoping to deliver Christmas gifts next year because it would mark the 10th anniversary of their efforts.

“It really depends on the economy,” said Mary Hendrian. “We really want to try to go through our 10th year.”

Hendrian said her favorite part about helping others in Letcher County is “coming back to the mountains and seeing the smiles on the faces.”