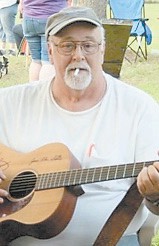 Memorial services will be conducted at a later date. Burial will be at the Clarence Blair Cemetery at Jeremiah.