By BETH HARRIS
The Associated Press 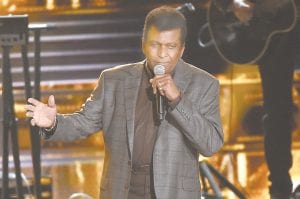 Charley Pride is seen here performing “Kiss An Angel Good Morning” at the 50th annual CMA Awards at the Bridgestone Arena in Nashville, Tenn. Pride finds himself in the spotlight with two upcoming PBS projects: “Country Music,” Ken Burns’s film on the genre’s evolution and the people who created it, and “Charley Pride: I’m Just Me,” airing as part of the American Masters series on Feb. 22. (Invision/AP)

Paging Terrence Howard. Charley Pride still wants the actor to play him in a movie of the country music star’s life.

The project has been discussed for about 10 years. Pride told a TV critics’ meeting that it remains a goal to have it made with Howard, who stars in the Fox music series “Empire.”

Meanwhile, Pride finds himself in the spotlight with two upcoming PBS projects: “Country Music,” Ken Burns’s film on the genre’s evolution and the people who created it, and “Charley Pride: I’m Just Me,” airing as part of the American Masters series on Feb. 22.

The 84-year-old Grand Ole Opry member shrugs off any suggestion of legend status as one of the few African Americans to find success in country music. His 1971 crossover hit “Kiss an Angel Good Mornin’ “ earned him Country Music Association Entertainer of the Year honors.

He used to pick up extra cash by singing before Negro League games. Pride got as far as tryouts with the then-California Angels and New York Mets, but never made the majors like his idol Jackie Robinson.

Eventually, the son of Mississippi sharecroppers began working toward a performing career, already having taught himself to play a $14 guitar ordered from the Sears catalog by his mother.

“I have no answer to what I’ve been able to achieve,” Pride said. “Once I come out and start singing, it doesn’t matter if I was pink. They wanted to hear me sing. That’s the way my career has been all these years.”

“One of the recurring stories about country music is that it is a bottom-up art form,” writer and co-producer Dayton Duncan said. “Many of the people who became iconic and transformational in country music came from the poorest of backgrounds. The music speaks of universal themes and topics. That’s when it’s at its best and at its most powerful.”

To promote the series, Burns will participate in a 30-city bus tour culminating in Nashville with a concert at the historic Ryman Auditorium.

The series ends in the mid- 1990s, even though current musicians Dierks Bentley and Rhiannon Giddens of Carolina Chocolate Drops were among the 101 interviews conducted.

“We made it clear they’re just too damn young for us to cover their career,” Duncan said.