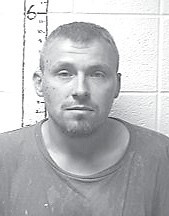 A Jackhorn man remains in the Letcher County Jail after fleeing from police while operating an all-terrain vehicle last week.

Kenneth W. Burke, 30, of 48 Grassy Fork, was arrested July 23 and charged with operating an ATV on a roadway, first-degree fleeing and evading, first-degree wanton endangerment and second-degree criminal mischief.

Fleming-Neon Police Officer Tim Miller attempted to stop Burke after he was seen traveling on KY 317 in Neon on July 23, according to a written police citation.

Burke traveled to Yonts Fork and onto a trail, according to a court document.

Miller said he saw Burke coming out of Yonts Fork and again attempted to stop him as he headed toward Rockhouse.

Officers attempted to box in the subject with cruisers and Burke turned, rammed a police cruiser and then fled down KY 317 and turned into Goose Creek, according to a citation.

Burke’s ATV flipped on a strip job and he was arrested.

He remains in the Letcher County Jail. Bond is set at $5,000 cash plus home incarceration.