Chase reached speeds of more than 115 mph before stopping 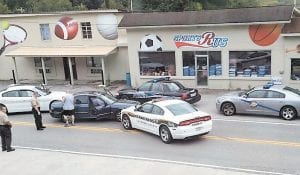 A Pike County man faces 10 charges, six of them felonies, after leading police on a high-speed chase through parts of two states on Sunday.

Bradley Alexander Meadows, 30, of 430 Kentucky Highway 611, Pikeville, was charged with three counts of first-degree wanton endangerment of a police officer, firstdegree fleeing or evading police, two counts of possession of a controlled substance, and operating a vehicle while under the influence of alcohol or drugs when the chase that began in Pike County ended in Whitesburg at 5:40 p.m. on August 31.

Here is how the chase began and ended, according to descriptions contained in citations filed by Letcher County Deputy Sheriff Travis Cantrell, who is responsible for apprehending Meadows:

“I was dispatched by Kentucky State Police Post 13 to assist the Pike County Sheriff ’s Department with a pursuit on U.S. 23,” Cantrell wrote. “The pursuit [by Pike County] was terminated prior to my arrival at the Jenkins Police Department. [Meadows’s] last known direction of travel was in Virginia, heading towards the Flat Gap community [of Letcher County]. I turned around and headed toward the Kentucky Highway 932 and U.S. 119 junction [at Oven Fork] to attempt to locate this vehicle,” a 2002 dark blue Hyundai. 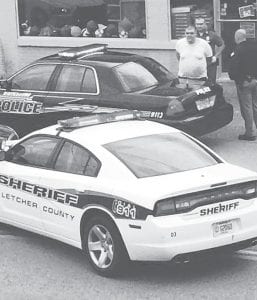 “I located the vehicle at the junction of Highway 1679 [Little Shepherd Trail] and U.S. 119. I activated my emergency lights and attempted to stop the vehicle. The vehicle failed to follow my directions to stop [and] started to accelerate when it passed my vehicle. I could see the driver and the passenger as the vehicle passed me. Neither the driver nor passenger was wearing seat belts. I turned and started to pursue the vehicle traveling North on U.S. 119 [Pine Mountain Road]. The vehicle was traveling at speeds exceeding 100 miles per hour. The driver passed three different vehicles during the pursuit on the wrong side of the road.

“During the pursuit the driver would try to slam his breaks, causing me to make contact with his vehicle. As the vehicle approached Pine Mountain Junction, it exceeded speeds of 115 miles an hour [and] failed to stop at the red lights while other vehicles were in motion.

“After the vehicle ran the red lights and attempted to turn right onto Business 15, the driver applied the brakes, causing me to make contact with the right side of the back bumper. The driver lost control of the vehicle and came to a stop at the junction [between the offi ces of Childers Oil Inc. and Sports R Us].

“ The occupants were instructed to exit the vehicle and lie face down. Both occupants were placed under arrest and ‘Mirandized.’ The driver stated he had taken some medication before the pursuit started in Pike County. His eyes were red and pinpointed and he was unsteady on his feet.

“ The passenger [ Shareena Akers] also showed signs of impairment in her eyes and her actions. Shareena stated she had taken neurontin [a drug used to treat seizures and nerve pain] earlier in the day. During the post-arrest search I found several different pills and a straw with white residue inside it in the middle console of the vehicle. I also found a container full of pills in a red clothing bag. Bradley Meadows admitted to me that all the pills belonged to him. Bradley was taken to the Whitesburg ARH for a blood test. Both were transported to the Letcher County Jail,” where Akers was charged with public intoxication and failure to wear a seat belt.

Meadows, who remained in custody Tuesday night, is also charged with failure to wear a seat belt, failure to maintain required automobile liability insurance, and driving on an expired registration plate.

Police believe Meadows began running from police in Pike County because he was wanted on outstanding warrants there.

“This person was really and truly apprehended because of their ability to multitask and coordinate with several different agencies at one time,” Damron said. “Having an asset like them makes our jobs a little easier.”