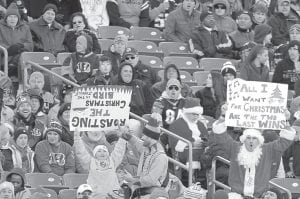 Bengals fans displayed signs during the second half of Saturday’s game against Arizona. Only 41,273 fans showed up on a sunny, 38-degree afternoon to watch the important win. Players buoyed by the chance to make the playoffs wasted no time lobbying for an audience. (AP Photo)

The Cincinnati Bengals haven’t been anywhere near the vanguard of the NFL for two decades now, a stretch that began not coincidentally when club founder Paul Brown died and son Mike took over.

Yet the Bengals might be again — for all the wrong reasons — if a mild downturn in league-wide attendance since 2007 becomes a trend.

The team’s 65,500-seat stadium, named in Paul Brown’s honor but financed by taxpayers, was less than two-thirds full Saturday as the team locked up just its third winning season in the last 21 years. Hoping to head off an even more embarrassing number of no-shows when Baltimore visits Sunday with a playoff berth on the line for Cincinnati, the team and players are practically begging fans to come.

“We need all of you this week,” said cornerback Adam “Pacman” Jones, one of a handful of players who made postgame pitches.

Cincinnati has finished in the middle of the pack in attendance season after season despite results that would doom a franchise in just about any other pro sport. But as a trio of TV deals announced just two weeks ago proved again, the NFL is unlike any other league. Despite stumbling through a lockout this summer and scrambling to cope with a growing concussion problem, it remains North America’s most popular game by just about any measure.

But even the NFL is not immune to a struggling economy. According to figures compiled by Business Insider, attendance at games has slipped four years in a row. In 2007, the league’s teams, on average, played to 99.9 percent capacity; last season, that figure was 94.6 percent. An NFL spokesman said Monday that 2011 attendance was down 0.5 percent ahead of the final regular-season weekend.

Already ahead of the curve, the Bengals touched a new low at Paul Brown Stadium this season against Buffalo (41,142) and sold out only one home game — a gift from thousands of Steelers’ fans who made the journey from Pittsburgh. Although Cincinnati currently occupies the league’s cellar in terms of attendance — 72 percent capacity, on average — St. Louis, Tampa Bay, Miami, Buffalo and even NFL-crazy Washington are all below 90 percent this season. Large swaths of empty seats weren’t uncommon in Jacksonville, San Diego, Kansas City and Indianapolis, too.

If there’s any consolation to be had from those numbers, it’s two-fold. First, other leagues would love to be playing in front of crowds at 95 percent capacity. Second, none of the other franchises lingering near the bottom have built up quite as much ill will with their fan base over time as the Bengals. Considering how much the NFL invests to help teams achieve parity and contend every so often — revenue-sharing, hard salary caps, franchise tags and the draft — it’s not easy to be as bad as the Bengals have been for that long.

Since taking over from his father, Mike Brown has skimped on front-office hires, drafted badly and dabbled frequently in washed-up free agents whose antics with previous teams made them not just available, but cheap. Instead of taking responsibility for the mess, Brown seems almost amused by it. So many of his players ripped him over the years that he tried — unsuccessfully — to put loyalty oaths in their contracts. When fans made their discontent known by hanging a banner just above his box in old Riverfront Stadium more than a decade ago — “If it’s Brown, flush it down,” the sign read — the owner let it be known that he, too, thought it was funny.

No one on either side of the divide is laughing at the moment, though. Despite the Bengals’ surprising 9-6 record this season, fans bearing grudges are staying away. That means less business for downtown merchants and lower tax revenues for a county struggling to cover the cost of basic services — let alone pay off the mortgage for a stadium that has been a boon for the Brown family.

This latest revolt, at least, caught his attention. No sooner had Saturday’s game ended than an offer to season ticket holders began flashing on the scoreboard — buy one ticket for the Baltimore game and get a second free. Next came the unbidden — we assume — locker room sales pitches from players and coach Marvin Lewis. By Monday morning, fans who turned up to buy what the team said were a “couple thousand” tickets for the Baltimore game munched on hot dogs, cotton candy, hot chocolate and water free of charge (though considering Brown’s tight-fisted ways, chances are good it was leftover food from last weekend’s games).

The ruse likely will work, so look for a sellout. As precedents go, however, the league can’t be too pleased with lowered ticket prices. While TV revenues skyrocket, attendance already has been dented by everything from the bad economy and high prices — average cost for a family of four last year: $426.84 — to fantasyfootball followers who can watch multiple games on their HD sets at home without paying $7 for a beer. Plus, it gets cold in plenty of NFL towns by the time December rolls around.

Of course, there’s another business model out there that proves a small-market team in an even-colder climate can fill up its stadium every Sunday. That would be the Green Bay Packers, who have come up with a solution that Brown likely never seriously considered.

Jim Litke is a national sports columnist for The Associated Press. Write to him at jlitke@ap.org.