Cheap Trick is out with best in 35 years 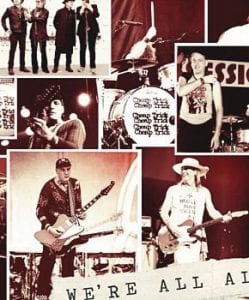 Cheap Trick is way better than all right on “We’re All Alright!” — which may be their best in 35 years.

With the album title taken from the ending chant on their signature song “Surrender,” Cheap Trick makes a bold declaration that joyful, unrestrained, in-your-face (and burned into your brain) rock ‘n’ roll is alive and well.

Even this band’s rejects are better than most bands’ A-material: The best track on the album, “Radio Lover,” sat atop a discarded demo pile for 20 years before surfacing here. It’s one of four up-tempo rockers in a row that kick off the album, including the scale-climbing “Nowhere,” and the first single “Long Time Coming,” which pays homage to their musical roots with a Who-like riff similar to “Can’t Explain.”

A bonus track that deserves to be on every copy of the album is a cover of The Move’s “Blackberry Way,” which sounds like what would result if The Beatles’ “Penny Lane” and The Monkees’ “Daydream Believer” had a baby.

Forty-four years after their debut, Cheap Trick has still got it going on: Robin Zander is screaming again at the end of verses, and Rick Nielsen’s quirky, minimalist guitar solos are as rambunctious as the most caffeinated garage band. This band neither surrenders nor gives anything away.