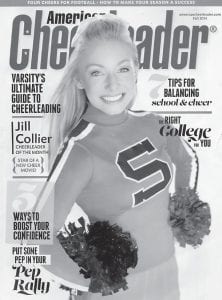 COVER GIRL — Jill Collier, a cheerleader at Southwestern High School in Somerset, was named Cheerleader of the Month and was pictured on the cover of American Cheerleader magazine’s fall issue. Her cheerleading squad was the winner of the 2013 National High School Cheerleading Championship and is also the subject of a documentary film.

National exposure in the form of a documentary film? Now that’s something worth cheering about. August 26, local athletics fans downloaded “American Cheerleader,” which tells the story of a pair of plucky high school cheerleading squads both vying for the national title.

One of them was very familiar — Southwestern High School in Somerset.

In February of 2013, Southwestern went up against national powerhouse Burlington Township High School, located in New Jersey a little over 20 miles outside Philadelphia. Burlington Township had won the top prize for the two years previous. Southwestern, meanwhile, had been inching ever closer — and finally won the Universal Cheer Association (UCA) national championship, as shown in the documentary.

Britani Shoemaker, cheerleading coach at Southwestern High School, said her girls were “blessed” to have the documentary filmmakers take notice of them.

“They wanted to pick two teams that were very different,” said Shoemaker. “Burlington won our division (Small Varsity Division II) for the last two years (but) the buzz about us was that we might be a contender for (the title) the next year.”

The buzz proved correct. Shoemaker, a 2003 Southwestern grad who cheered for the school herself, got to guide her alma mater to the championship and a spot in the film. It wasn’t something that was easy to immediately adapt to, however.

“We really had no idea what to expect,” said Shoemaker, now in her 10th year coaching Southwestern. “We were excited for the opportunity, but me and the girls were like, ‘Oh my goodness, what have we gotten ourselves into?’ (The film crew) would show up to practice and put a mic on me and the other coaches, and put mics on the girls. At first, it was unnerving, because everything you did, you had a mic on and a camera in your face.”

But the producers and technical crew won over the locals. “They were really just great people and we kind of formed relationships with them,” said Shoemaker.

A big part of that was trust in how the young women would be portrayed in the film. Shoemaker acknowledged that there have been other reality TV shows to feature cheerleading squads that might have focused more on “drama” — but “American Cheerleader” wasn’t like that.

“ They’re out to show cheerleading in a positive nature too,” said Shoemaker. “They were very adamant about that.”

That doesn’t mean it’s a dry take on cheerleading without the personal side of things, however. Shoemaker said four girls from both schools were specifi- cally featured to have their stories told in the film. For Southwestern, those students were Leanza Pieroni, Sydney Hale, Kailan Flynn, and Jill Collier.

“Each one of them kind of has a different story that the film tells throughout, just how cheerleading impacted their life in different ways, the different lessons that they’ve learned,” said Shoemaker.

“The first day of practice, (the producers) were going to mic the flyers, the girls who go up in stunts, just so they could hear what was said in the stunt group,” she added. “After practices, they would grab the girls to do quick interviews. Those girls were able to speak well.”

Additionally, producers asked beforehand if there were any stories of particular students who had overcome obstacles in life, but Shoemaker said that it “really just worked out that it was easier to mic the flyers and each of those girls had a story to focus on.”

Collier didn’t just get a prime spot in the movie — she’s in the magazine as well. Or on the magazine, more specifically, since her photo graces the cover of the fall issue of “American Cheerleader.”

The team was filmed in November and December of 2012, then came back in January before nationals. They then shot footage at the national championships, and came back afterwards to follow up, said Shoemaker. All of that footage is condensed down into a 90-minute documentary film that serves to not only portray the history of Varsity, the company that owns “American Cheerleader,” but a portrait of the sport itself and those who participate in it.

For Shoemaker, one of the key aspects of the film is how it shows the way cheerleading has changed over time, defying conventional perceptions of what it is and isn’t.

“I think it’s always a big debate, if cheerleading is a sport,” she said. “I think a lot of the time what the general public sees is the girls on the sidelines cheering for the basketball team or the football team, and that’s a huge part of what we do . . . but there’s a whole other side to cheerleading that’s the competitive world that’s taken off and grown.

“We have tryouts in April or May and start practices right away,” she added. “The season is from May until February, when we have nationals. We take two weeks off ( after that) and then we’re back in the gym conditioning. So (the students) have a really long season. They practice anywhere from three to six or seven times a week. Especially at the level where we are, contending for national titles, the skills we ask them to do are very elite and require a lot of athleticism. That’s the part of cheerleading that maybe fans don’t get to see on the sidelines, and I think the film really showcases that.”

“American Cheerleader” was released on the iTunes platform on August 26 and is also currently available for pre-order at www.americancheerleadermovie.com. It will also receive a red carpet premiere at the All- American High School Film Fest from October 24-26 in New York City.

The Southwestern Girls have already received a sneak preview of the film, however, and excitement for its release is high.

“ It’s really cool,” said Shoemaker. “. . . It’s really provided a lot of neat opportunities for the kids for sure.”

Reprinted from the Somerset Commonwealth Journal.