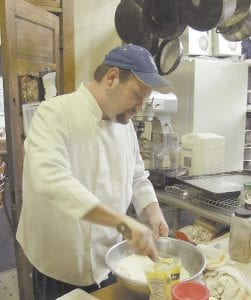 CHEF AT WORK – James Feltner worked to mix the ingredients of a dish he was preparing Monday. After graduating from culinary school and working in Florida, Feltner is now plying his trade in Letcher County, where he grew up. (Eagle photo)

Being able to come home to find work in the county where he was reared would seem to be the impossible dream for a chef who grew up in rural Appalachia. Thanks to a new law permitting alcohol sales in some local restaurants, that dream has become a reality for Letcher County native James Feltner.

When the owners of the Courthouse Cafe in Whitesburg were granted a license recently to sell alcoholic drinks on a limited basis, they began making plans to expand their menu and extend their operating hours. Doing that would require an extra cook to share the workload, so they placed a help-wanted ad in The Mountain Eagle.

“I always wanted to come back,” said Feltner, who graduated from Letcher High School in 1989. “A friend of mine saw the ad in The Eagle and called me, and I called them.”

Feltner made the call home about five weeks ago when he was a chef at Greenside’s Restaurant at the Harmony Golf Preserve in Harmony, Florida, a town located about 35 minutes away from Disney World. He is now the first chef to be employed at a Letcher County restaurant in the recent, if not the entire, history of the county.

“It’s a happy accident we found each other and were able to give him the opportunity to come home and join our staff,” said Josephine Richardson, who co-owns the Courthouse Cafe with Laura Schuster. “It’s an opportunity for him as well as for us. He brings new skills and creative ideas.”

Some of those new skills and ideas were on display late Monday afternoon as Feltner was whipping up the ingredients for side dishes to go with his special meal of the evening, Bourbon Beef – thick pieces of prime rib which carried just the lightest taste of Kentucky’s most famous beverage.

A graduate of the Le Cordon Bleu-affiliated Orlando Culinary Academy, Feltner lists Italian and French as his favorite styles of cooking. However, he says he gets just as much enjoyment knowing that customers appreciate the rib-eye steaks he likes to butcher, season, and cook to order.

“A good steak is the backbone of a good restaurant,” said Feltner. “If a restaurant can do a steak right, you can pretty much count on everything else on the menu being right.”

Feltner, 36, said he became interested in cooking while helping his late mother Goldie, who was half-Italian and half-German, prepare Italian dishes at their home on Crases Branch. His late father Elbert operated roofbolting machines for South East Coal Company for many of the 40 years or so he worked underground.

Feltner said that after graduating from Letcher High, he tried to make a living in Letcher County “by hanging around and doing odd-jobs.” He then made the decision to move to Florida, where he used the cooking skills his mother taught him to land a job as a cook with the Universal Studios theme park in Orlando. After finding success there, he went on to get his four-year culinary degree from Le Cordon Bleu.

While the idea of finding work as a chef in Letcher County was a long shot, Feltner said he always held out hope that he would someday get the opportunity.

“I always wanted it to happen because, honestly, I think there’s been a need for it,” he said. “I knew many people growing up who appreciated good food.”

Feltner said one thing he hopes to accomplish by working professionally in Whitesburg is to show people that a restaurant doesn’t have to be expensive just because it employs a chef. As examples, he points to the Courthouse Cafe charging only $12.95 for a meal consisting of a large rib-eye steak, baked potato and vegetable, and charging between $8.95 and $10.95 for most other beef and seafood specials on the menu.

“I was afraid customers would be worried about prices skyrocketing,” said Feltner, “but we still offer the freshest foods at the best price – especially if you have to buy gas” to go somewhere else in the region.

Feltner said he had no idea how much there was to learn about cooking through an institute like Le Cordon Bleu before he got there.

“There’s a lot to it that people don’t realize,” he said. “They trained us in (how to prepare) all the classical sauces, how to butcher meat, how to cut fish, how to bake bread, and how to make desserts.”

Feltner said he also received intense training in “dietary nutrition” while at the school. He said the knowledge now allows him to prepare restaurant meals for customers with special needs, including those who are diabetic, those who can’t have gluten in their diets, and those who are lactose intolerant.

“If customers will let the wait staff know of their needs I will do my best to accommodate them,” he said.

Feltner believes the decision by Whitesburg voters earlier this year to make alcohol sales legal in certain restaurants will combine with the town’s location and scenic beauty to make it a hot spot for dining activity.

“I want to settle in and help make this restaurant be the flagship for the culinary explosion that’s on the horizon in this area,” said Feltner. “I think it’s been a long time coming.”

Richardson and Schuster said they hope to have the Courthouse Cafe open for dinner on Saturdays beginning the first weekend in December. Feltner said he looks forward to that happening as well, if for no other reason than it gives more people the opportunity to eat the foods he’ll be preparing.

“I love to see people eat my food and enjoy it,” said Feltner. “I believe that food is not only a requirement for survival, but it’s something that draws friends and families together. Good food, to me, is one of life’s simple pleasures.”