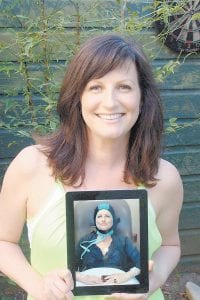 Breast cancer survivor Miriam Lipton, of San Francisco, holds a picture of herself taken while she was undergoing chemotherapy two years ago wearing the DigniCap, an experimental scalp-cooling system that she credits with preserving most of her hair. Hair loss is one of the most despised side effects of chemotherapy. (AP Photo)

Hair loss is one of chemotherapy’s most despised side effects, not because of vanity but because it fuels stigma-revealing to the world an illness that many would rather keep private.

Now U.S. researchers are about to put an experimental hair-preserving treatment to a rigorous test: To see if strapping on a cap so cold it numbs the scalp during chemotherapy really works well enough to be used widely in this country, as it is in Europe and Canada.

The first time Miriam Lipton had breast cancer, her thick locks fell out two weeks after starting chemotherapy. But when the disease struck again, she used a cold cap during treatment and kept much of her hair, making her fight for survival seem a bit easier.

“I didn’t necessarily want to walk around the grocery store answering questions about my cancer,” recalled Lipton, 45, of San Francisco. “If you look OK on the outside, it can help you feel, ‘OK, this is manageable, I can get through this.’”

Near-freezing temperatures are supposed to reduce blood flow in the scalp, making it harder for cancer fighting drugs to reach and harm hair follicles. But while several types of cold caps are sold around the world, the Food and Drug Administration hasn’t approved their use in the U.S.

Scalp cooling is an idea that’s been around for decades, but it never caught on here in part because of a concern: Could the cold prevent chemotherapy from reaching any stray cancer cells lurking in the scalp?

“Do they work and are they safe? Those are the two big holes. We just don’t know,” said American Cancer Society spokeswoman Kimberly Stump-Sutliff, an oncology nurse who said studies abroad haven’t settled those questions. “We need to know.”

To Dr. Hope Rugo of the University of California, San Francisco, the impact of hair loss has been overlooked, even belittled, by health providers. She’s had patients delay crucial treatment to avoid it, and others whose businesses suffered when clients saw they were sick and shied away.

With more people surviving cancer, “we need to make this experience as tolerable as possible, so there’s the least baggage at the end,” Rugo said.

“Quite frankly, it’s the first or second question out of most patients’ mouths when I tell them I recommend chemotherapy. It’s not, ‘Is this going to cure me? It’s, ‘Am I going to lose my hair?’” adds Dr. Susan Melin of North Carolina’s Wake Forest Baptist Medical Center.

Later this summer, Rugo and Melin, along with researchers at a few other hospitals in New York and California, will begin enrolling 110 early stage breast cancer patients in a study of the DigniCap brand of scalp cooling. The tight-fitting, insulated cap is attached to a cooling machine to stay around a shivery 41 degrees as patients undergo chemo. Participants’ hair will be photographed for experts to assess, and they’ll be compared with a small group of similarly ill patients who get chemo alone.

Lipton was among 20 U.S. patients who pilottested the DigniCap in 2011, most of whom kept more than half of their hair. Lipton’s thinned quite a bit at the crown, where the cap didn’t fit snugly. But because her bangs and surrounding hair remained, the mother of two covered the thinning with a headband, not a wig. The side effect: Pain and a headache as the cold set in.

“It wasn’t perfect, but it was easier,” said Lipton, who’s healthy today. “I felt normal much more quickly.”

If the larger study is successful, Sweden’s Dignitana AB plans to seek FDA approval to market the medical device in the U.S. The move could open the way for other brands and insurance coverage.

Clearly there’s demand: Despite the lack of FDA approval, a growing number of U.S. patients are renting a similar product, called Penguin Cold Caps, from a British firm for $455 a month. Patients haul a collection of caps to chemo sessions on dry ice, or store them in special freezers provided by about 50 hospitals. It’s deliberately separate from doctors’ and nurses’ care — typically, patients bring a friend to help them switch caps every 20 to 30 minutes when one loses its chill.

“I know I’m sick, but I don’t want to look it,” said Vanessa Thomas, 57, of Baltimore, who is using the Penguin caps at the recommendation of her doctor at MedStar Harbor Hospital. Halfway through her breast cancer treatment, Thomas says her hair feels only a little thinner.

Beyond breast cancer, advocates say the caps may be useful with other solid tumors as well.

What’s the evidence behind scalp cooling? A recent review by oncologists in the Netherlands found numerous overseas studies conclude scalp cooling can work — but it’s far from clear which patients are most likely to benefit, even how cold the scalp should be. That’s because most of the research so far has been from observational studies that can’t provide proof. But it seems harder to save hair with higher doses and certain types of chemo.

Researchers at New York’s Weill Cornell Breast Center reported at a recent meeting of the American Society for Clinical Oncology that among just over a dozen Penguin cap users tracked so far, one lost enough hair to use a wig.

As for safety, UCSF’s Rugo said a recurring tumor in the scalp is incredibly rare.

“If it matters to our patients, it should matter to us,” she said. “It’s really not more complicated than that.”