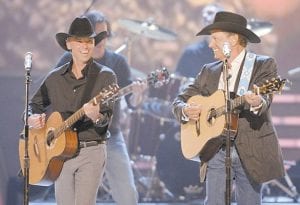 Kenny Chesney won entertainer of the year for a fourth straight time Sunday, then promptly took issue with the way the Academy of Country music awarded the honor: through fan votes.

For the first time in the show’s 43 years, the top prize – traditionally decided by ACM members – was determined through online voting. With the win, Chesney ties Garth Brooks and trails only Alabama, which won five in a row.

Chesney said immediately backstage that he thought fans should be included, just not by voting for the show’s most important award.

He said his complaint is directed at the industry, not the fans – and that the method amounted to “complete disrespect” of the artists, saying the academy turned the award “into a sweepstakes to see who can push people’s buttons the hardest on the Internet.”

Chesney was the night’s leading nominee with 11, and ended up winning twice. His other win was for vocal event of the year for his work on the Tracy Lawrence hit “Find Out Who Your Friends Are.”

“I really want to say the reason I’m in country music is because my grandfather would make me listen to Buck Owens when I was like 4 years old, and I think Buck was the first male vocalist for this organization. I’m so honored to carry the torch for another year,” Paisley said.

“I know I don’t deserve it, but I’ll take it,” Underwood said. “Fans got me everything I have, and I owe everything to you.”

It was a night of repeats. Rascal Flatts’ top vocal group win was its sixth in a row, while Brooks & Dunn won their 13th straight award for top vocal duo.

“We’d like to give God all the thanks and all the glory for giving us a stage to stand on every night,” said Rascal Flatts singer LeVox. Bandmate Joe Don Rooney had other things on his mind. He glanced at his watch and said he had to get home. “I’ve got a baby coming any minute.”

LeVox disagreed with Chesney about the night’s top honor, saying he hoped it the fans continued to choose.

“It’s about time,” he said, calling fans “the reason that all three of us have jobs.”

Dr. Phil presented Brooks & Dunn their award. “I’m glad Dr. Phil was here because we need therapy for this one,” Kix Brooks cracked.

Miranda Lambert won album of the year and Sugarland took single record and song of the year honors for their mellow hit “Stay.”

“I’m sitting right behind Kenny Chesney and I just don’t feel right taking this,” said Lambert, who won for her sophomore outing, “Crazy Ex-Girlfriend.” ”I’m a songwriter, and I poured my heart and soul into this album. Thank you for appreciating it.”

The win was big for Lambert, who beat out superstars Chesney and Paisley, as well as hot new acts Taylor Swift and Rodney Atkins.

Jack Ingram won top new male vocalist. The 37-year-old Texan released his first album in 1992 and bounced around a number of record labels before his career took off.

Lady Antebellum took home top new duo or vocal group. “Does this mean we get to hang out with Kenny Chesney now?,” the trio’s Charles Kelley joked.

Swift won top new female vocalist. The 18-year-old thanked her mother for going on the road with her beginning when she was 16, leaving behind a comfortable life to sleep in rental cars and on airplanes so her teenage daughter could pursue her dream.

“Mom, thank you so much,” she said as she fought back tears. “I love you. This is for you.”

Earlier, Brad Paisley’s “Online” won video of the year. It was directed by former “Seinfeld” star Jason Alexander, who also co-starred and made an onstage appearance Sunday night, joking that he didn’t believe the stereotype of country stars and fans being religious – seeing as he hadn’t spotted any of them at synagogue.

Tracy Lawrence won vocal event of the year for “Find Out Who Your Friends Are” with Tim McGraw and Chesney.

Underwood the show, aired live from the MGM grand, with her rocker, “I Don’t Even Know His Last Name.” Strait, who was celebrating his 56th birthday, performed his 56th No. 1 hit: “I Saw God Today.” Swift did “It Should Have Been Me” and ended it by getting drenched in a cascade of water.

Brooks received the ACM’s Crystal Milestone Award and did a medley of his hits that included “The Thunder Rolls,” ”Friends in Low Places” and “More than a Memory.”

Paisley and Underwood performed a stripped-down version of Eddy Arnold’s classic “Make the World Go Away.” Arnold died May 8, days short of his 90th birthday.

McEntire hosted the show for the 10th time, going back to 1986. In those days, she joked to open the show, “Underwood was a typewriter, Sugarland was doughnut shop and a Pickler was someone who made pickles.

“Back then, Roger Clemens wasn’t even interested in country music,” she cracked. Clemens recent acknowledged a longstanding relationship with country singer Mindy McCready that began when she was 15. The former baseball player maintains the relationship was not sexual.