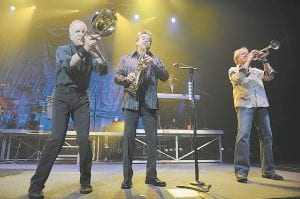 “Colour My World,” “Questions 67 And 68,” “You’re the Inspiration,” “Beginnings,” “I’m A Man,” “Saturday In the Park,” “25 or 6 to 4,” and “Does Anybody Really Know What Time It Is” are among the biggest and best-loved songs performed by Chicago during their long career. The band will play them all and many more in an intimate setting this Saturday night at the Eastern Kentucky Expo Center in Pikeville. Pictured above are, from left, James Pankow, Walter Parazaider and Lee Loughnane, three original members of the band known as Chicago Transit Authority when it hit the scene in 1967.

Considered one of the longest running and most successful pop/rock ‘n’ roll groups in history, Chicago is the highest charting American band in Billboard Magazine’s list of Top 100 artists of all time, coming in at No. 13. Lifetime achievements include a Grammy Award, multiple American Music Awards, elected as Founding Artists to the John F. Kennedy Center for the Performing Arts, a Star on the Hollywood Walk of Fame, and a Chicago street dedicated in their honor. Since their first album, also titled Chicago Transit Authority was released in 1969, the “legendary rock band with horns” have had record sales top the 100,000,000 mark including 21 Top 10 singles, five consecutive Number One albums, 11 Number One singles and five Gold singles. An incredible 25 of their 34 albums have been certified platinum, and the band has a total of 47 gold and platinum awards.

Good tickets for Saturday’s show, which will be set up as a “half house,” remain at www.ticketmaster.com or by calling the Expo Center ticket office at 606-444-5500. (AP photo)