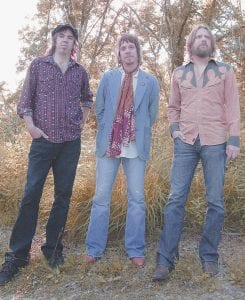 “In a time when old-fashioned
rock and roll is coming back in
style, The Steepwater Band is a cut
above the rest of the field.” —
Pop Culture Press

“Not only do these longhairs
know their Johnny Winter and
their Johnnie Walker, they sure as
shootin’ dish it out in a nuclear
hoedown of dirty fuzztone lead
and slide guitar riffs.” —
Creem Magazine

The Steepwater Band will perform in concert in Whitesburg this Saturday (Nov. 13), less than a month after releasing a new live album that reminds listeners of classic rock bands The Rolling Stones and Faces and newer bands The Black Crowes and The Black Keys.

Formed in Chicago in 1998 after its three members met at a Black Crowes concert, the Steepwater Band quickly became a power trio that progressed from covering bluesmen Robert Johnson, Muddy Waters and John Lee Hooker to crafting their own rock sounds. 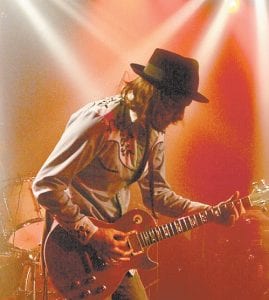 The Steepwater Band tours relentlessly, performing nearly 125 shows each year. They will perform at Summit City in Whitesburg in a Saturday concert that begins at 9 p.m. Wise County’s T-bone will open.

The high energy associated with The Steepwater Band’s live shows has earned them a loyal fan base and critical acclaim. Their new album “Live at the Double Door” was released on Oct. 17 and features 95 minutes of songs from their well-received studio albums “Revelation Sunday” and “Grace and Melody.”

Guitarist “Jeff Massey’s dirty sounding, masterful slide work reminded me of ‘Exile On Main Street’ era Stones,” wrote Ryan Sparks of Classic Rock Revisited. “The band’s sound is firmly entrenched in the roots of the blues; however they also up the ante by throwing tinges of psychedelia and country into the mix and the sound is absolutely massive and in your face at all times.”

Including “Live at the Double Door,” recorded at one of Chicago’s most famous rock clubs, The Steepwater Band has released five full-length records, and each album has garnered substantial radio airplay across the Midwest, including on Chicago’s influential WXRT-FM. Their songs have been placed in network television shows (“Deadliest Catch,” “Friday Night Lights,” and “My Name is Earl”), a major motion picture (Disney’s “Invincible”, and a 3 year national ad campaign that debuted during the World Series.

It was a serendipitous meeting at a Black Crowes concert that brought friends Winters and Bowers together with Massey. A decade later in May ‘08, the trio found themselves in California recording with Grammy winner Marc Ford as producer, the musician widely regarded as the Black Crowes’ finest guitarist and integral to their prime years. The band met Ford while sharing a bill at a festival in Spain in the summer of ‘07. A friendship was forged when they invited Ford to sit in on Neil Young’s “Cortez the Killer.” Ford expressed interest in collaborating with the band shortly after producing the first two critically acclaimed albums from artist Ryan Bingham.

The 2008 LP “Grace and Melody” was recorded in just nine days at the organic Compound Studios in Long Beach, California. With Ford’s direction, the band dug deeper into the grit of their past records while exploring new influences that gave the record a fresh sound.