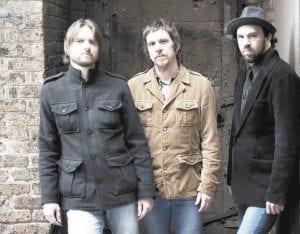 HERE ON SATURDAY — The Steepwater Band, a rock trio from Chicago, has performed with ZZ Top, Wilco, Robin Trower, Gov’t Mule and others. They will be onstage Saturday night at Summit City in Whitesburg.

Bands and artists from Illinois, Kentucky, North Carolina, Tennessee and Virginia will visit Whitesburg on Friday and Saturday as Summit City offers its strongest weekend musical lineup in some time.

On Friday night, the southern rock band Velvet Truckstop of Asheville, N.C., will co-headline a show with Reagan Boggs & The Coal Men. On Saturday, Chicago rockers The Steepwater Band, a trio which has played with ZZ Top, Wilco, Robin Trower, Drive-by Truckers and others, will perform at Summit City for the first time since their sold-out and highlyacclaimed performance there last November.

Boggs, a Pound, Va., native whose tribute song to coal miners “Thank You” has helped reignite her young and already-promising career, will kick the weekend off at 8:30 p.m. on Friday when she takes the stage with backing from her friends The Coal Men of Nashville, Tenn. (A profile of Boggs appeared in the Sept. 14 edition of The Eagle.) 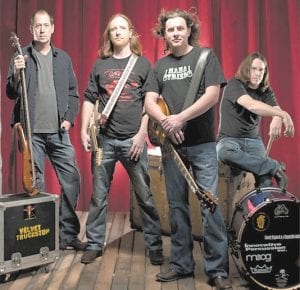 Velvet Truckstop is a southern rock band from Asheville, N.C.

When Velvet Truckstop takes the stage immediately after the set by Boggs and The Coal Men, they too will be making their first appearance in Whitesburg since last year. The band is sporting a new lineup and is nearing completion of its second full-length studio album, this one produced by Johnny Sandlin who has also overseen efforts by The Allman Brothers Band, Delbert McClinton, Wet Willie, Elvin Bishop, Widespread Panic and other southern rock stalwarts.

“Velvet Truckstop is winning hearts, minds, and ears with their no-nonsense approach to down home rock and roll,” wrote Don Talley, editor of The Asheville Music Scene. “Not content with staring in the rearview mirror, Velvet Truckstop is creating fresh and authentic music with appeals to a new generation of fans.”

Admission to the Reagan Boggs/Coalmen and Velvet Truckstop show on Friday night is $10 at the door. Promoter Greg Napier has announced that patrons who attend Friday’s show will be eligible for a $2 discount on tickets to Saturday’s performance by The Steepwater Band.

The Steepwater Band’s latest studio release, “Clava” (pronounced CLAY-va) finds the band hitting their most creative and focused point of their careers. The new record was recorded this past March on the South Side of Chicago at the studio of the same name.

Jambase.com’s Dennis Cook wrote that Clava is “one of the best rock albums to hit in 2011.”

“Nothing’s too gussied up so the honest grit and sweat of rock ‘n’ roll comes through loud and clear, and behind everything a crossroads right blues soul howls,” added Cook. “Clava continues the group’s evolution by simply refining every promising aspect this taut trio has exhibited in the past. If you’re charged up by what The Black Keys or Black Crowes are putting down lately, there’s little doubt Clava will flip your wig big time. “

Although The Steepwater Band got their start as devotees of delta blues, they have since been expanding on their musical influences taking on everything from psychedelia to Americana, and of course, hardhitting rock and roll. Formed in Chicago in 1998, the band’s signature sound is at once a nod to earlier rock n’ blues combined with a raw and gusty musical approach. Band members Jeff Massey (guitar & vocals), Tod Bowers (bass) and Joe Winters (drums) have a synergy that comes from years of playing together.

The band’s infectious energy is equally evident in their live performances, as critics and fans hail their shows as forceful and intoxicating. In 2010, the band released a highly lauded live record entitled “Live at the Double Door” which contained tracks from their previous two LPs, “Revelation Sunday (2006)” and “Grace and Melody (2008).”

The Steepwater Band has maintained a grueling schedule throughout the last 10 years, averaging about 125 shows per year. In addition to the artists mentioned earlier, they have toured and shared the stage with acts such as Gov’t Mule, Buddy Guy, Taj Mahal, Marc Ford, T-Model Ford, North Mississippi All Stars, Leon Russell, Robert Randolph & the Family Band, Cheap Trick, Arc Angels, The Doobie Brothers, Bad Company and Heart.

The band will be returning to Spain for another tour on October 1.

Songs by The Steepwater Band have been featured on the television shows “Friday Night Lights,” “Deadliest Catch” and “My Name is Earl.”