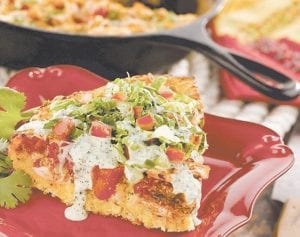 Chicken Taco Cornbread Wedges with Ranchero Cilantro Drizzle was named the grand prize winner of the 2007 National Cornbread Cook-Off, sponsored by Martha White and Lodge Cast Iron and held in conjunction with the National Cornbread Festival in South Pittsburg, Tenn.

The competitors served up quite a bit of competition as food experts from across the country judged main-dish cornbread recipes. The ten finalists were chosen to compete from more than 700 entries nationwide. Entrants were asked to submit original, main dish recipes prepared with Martha White cornmeal or cornbread mix and cooked in Lodge cast iron cookware.

Jenny Flake from Gilbert, Ariz., created the grand prize winning recipe Chicken Taco Cornbread Wedges with Ranchero Cilantro Drizzle by expanding on the ever-popular taco theme. A cornbread crust, accented with crushed corn chips, is topped with a spicy chicken, tomato and green chile filling. The dish is sprinkled with cheese and baked up in a cast iron skillet. For a special finishing touch, wedges of cornbread are topped with romaine, tomatoes and a drizzle of Jenny’s special cilantro sauce – an easy-to-make combination of ranch dressing, salsa verde and cilantro.

Bake at 400º F. for 16 to 20 minutes or until golden brown. Cut into wedges. Top with romaine and tomatoes; drizzle with dressing.