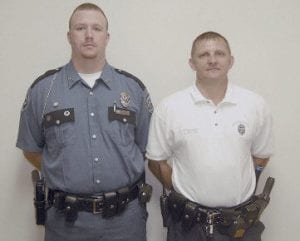 Whitesburg Officer Justin Gayheart (left) and Sergeant Mark Sexton have each performed CPR to save a life.

Two Whitesburg City Police officers deserve recognition for their efforts in helping save the lives of two citizens, their boss says.

“I would like to let people know how fortunate we are to have officers of this caliber working in this community,” said Adams.

Officer Gayheart performed CPR on a man who was found not breathing and with no pulse at the Super 8 Motel on July 28.

“The doctor at the (emergency room) said he would not have made it to the ER if we hadn’t performed CPR,” said Gayheart.

Sergeant Sexton performed CPR on a woman at the Mountain Heritage Festival on September 25.

“Upon arriving he found the woman not breathing and with no pulse,” said Adams. “Sgt. Sexton then saw that the woman was turning blue and started CPR. On the last compression of the second round of CPR, she took a deep breath and was revived.”

Sexton said the woman received a pacemaker later that week.

“I know it wasn’t me. I was a tool of God. I was in the right place at the right time,” said Sexton. “If I don’t do anything else the rest of my police career, I did save one life.”