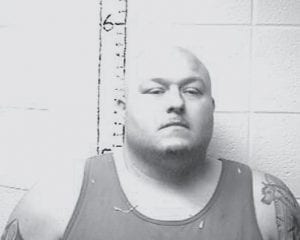 A Jeremiah man is accused of breaking into the Whitesburg police chief’s home last week and stealing a gun and money.

Whitesburg Police Chief Tyrone Fields, who lives in an apartment at the Whitesburg Housing Authority, said the man accused was doing contract work for the housing authority when the theft occurred.

Fields said Christopher Mc- Clain, 31, of 110 Mitch Drive, had been working in his apartment after it was damaged January 29 by flooding in a nearby apartment.

“We had no reason not to trust him,” said Fields. “He worked extra hard.”

Fields said the night after Mc- Clain had worked in his apartment, McClain crawled through a window and stole a Glock 40-caliber model 22 agency-issued handgun and $400. No one was home when the apartment was broken into.

Fields said he noticed that the door to his dryer was open, and that after looking around his apartment he saw a muddy shoeprint on the kitchen floor. The dryer is located near the window through which McClain allegedly entered the apartment.

Lt. Brian Damron of the Letcher County Sheriff ’s Department measured the footprint and asked McClain for his shoe.

“ The bottom of the shoe matched the print on the floor,” said Fields.

McClain was arrested January 31 at the Whitesburg Housing Authority and charged with operating a motor vehicle under the influence of drugs, third-degree possession of controlled substances and prescription medication in improper container. Police found five white oval pills in McClain’s possession, which McClain said were Neurontin, a written citation says.

Fields said McClain told him that he had something under his front seat of this truck that belonged to Fields. It was the gun, Fields added.

McClain was also charged with carrying a concealed deadly weapon and first-degree burglary.

A preliminary hearing for McClain is set for 1 p.m. on Thursday. He is being held in the Letcher County Jail. Bond is set at $100,000 cash with home incarceration.