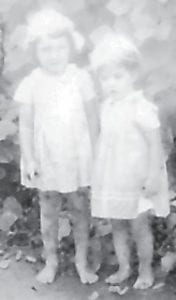 Believe it or not, I made another mistake last week. There was a picture I wanted to put in the column, but when I transferred it to my email draft it sent it way too big and, so they received the article but that picture wasn’t with it.

It did however go along with the state employees’ and teachers’ rallies going on at the state capital for the past month or so. So, I will add it to this week’s column.

My Papaw, Henry Calvin Pennington, is holding the document with Dewey Brown. The other men with him are Willie King and Russell Howard.

Our family is praising God again for answered prayers. Mom did have her back x-rayed and a brain scan and there was nothing wrong with her back.

She broke it in March of 2016 and we thought that might be what was causing her trouble, but Dr. Gish said her vertebrae still looked good. She said it was arthritis. Also, the brain scan didn’t show any signs of strokes or anything else. So, she told Dr. Gish she would start going back to the rec center when it warmed up some. She went to church with me at Letcher Independent Baptist Sunday morning. They surely enjoy seeing her there. I know they miss her, though, at Millstone Missionary Baptist. 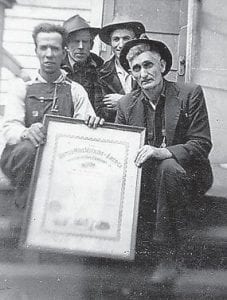 Henry Calvin Pennington and Dewey Brown display a United Mine Workers of America document with Willie King and Russell Howard.

As far as I know Robert Wagner is supposed to be coming home tomorrow from Pikeville Medical Center Rehab. His daughter Peggy told me last week that’s all he wanted, just to be able to go home. We are praying he gets back to good health again.

I also saw on Facebook where Judy Howard Greene’s daughter Tabitha will have to be on blood thinner for the rest of her life because of the blood clots that were in her lungs. Judy was thankful that she was going to be okay and was thanking everyone that prayed for them.

I talked with Jim Adkins at the rec center last week and he said his mom, Imogene Howard Adkins (she goes by Jean), is just enjoying staying home these days, just like Mom. I’m thinking if it ever warms up enough to where we can get out without our winter coats, we may just have to stop by and see her.

Don’t worry though, Jean, we will call and let you know beforehand.

I was thinking the other day about how different children are today than when we were growing up. Friday, it was a beautiful day outside and I asked my grandkids when they came down to spend the night if they had been outside playing.

I knew what their answers were going to be before they even answered. But, when we were young as soon as we got our chores done we were outside. I don’t think we even cared if it was cold. Mommy would have to yell for us to come home when it was suppertime.

This reminds me of something that we did one day that got us all in trouble. There was an elderly couple, a brother and sister, who lived way up in Cane Hollow at the last house, and it didn’t even have a road up to the house. The last part of the way was just a path in the woods.

They were in their 70’s at least when this happened. One day when we were all out playing way up in the hollow, we thought we would just walk on up there and visit with them.

Daddy would take us up there to visit all the time so we didn’t see anything wrong with us going by ourselves. Daddy loved to listen to them talk about their growing-up days and they would walk around the yard looking at the bee stands and their garden.

So anyway, we went and I remember the visit very well. I remember looking at the sister’s hairbrush with all the gray hair in it and she had a wad of gray hair all balled up that she said she would take outside for the birds to use for nest building.

I don’t have any idea how long we stayed but as we were walking back down and made it to the road, here came Daddy in our little Beetle Bug Volkswagen. We thought he would give us a ride back to the house, but no he stopped and asked where we had been.

When we told him he said, “Alright, everyone of you get you a switch and come on home.” We couldn’t for the life of us figure out why he was mad.

Well, we talked about what size switch and what kind of tree and wouldn’t you know it, Delores, the baby one, decided she was going to get a little bitty stick that would break if you just touched it. And lo and behold, that’s what she did.

The rest of us got a little “keen switch”, if you know what I mean. I really don’t remember how it turned out, if he used her switch on her or not, but I bet she does. I think he tried to explain to us why he didn’t want us going up there by ourselves, but we didn’t understand then.

After we were grown and had kids of our own a whole lot of what our parents did made so much more sense. When we had friends, can you believe it, they wanted to know who their parents were. I just couldn’t understand why that made any difference.

I would think to myself, their parents aren’t my friends, so what does that matter? How quickly I learned exactly why they cared who my friends’ parents were.

Please remember to pray for all the people who have lost loved ones recently. Remember our pastor, Bill Jones, and his wife Sandy. We all love them dearly and pray for God to comfort their hearts.

And, remember how Oma’s article always ended? Try your best to be in church somewhere this Sunday, and I say if your church has services Sunday night and throughout the week God would want you there then, too.