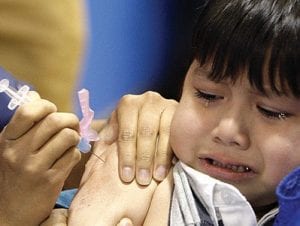 Edwin Garcia, 5, reacted as he got a flu vaccination at Carlin Springs Elementary School in Arlington, Va., earlier this year. A new study finds that one in four U.S. parents believes some vaccines cause autism in healthy children, but even many of those worried about vaccine risks think their children should be vaccinated. (AP Photo).

One in four U.S. parents believes some vaccines cause autism in healthy children, but even many of those worried about vaccine risks think their children should be vaccinated.

Most parents continue to follow the advice of their children’s doctors, according to a study based on a survey of 1,552 parents. Extensive research has found no connection between autism and vaccines.

“Nine out of 10 parents believe that vaccination is a good way to prevent diseases for their children,” said lead author Dr. Gary Freed of the University of Michigan. “Luckily their concerns don’t outweigh their decision to get vaccines so their children can be protected from lifethreatening illnesses.”

In 2008, unvaccinated school-age children contributed to measles outbreaks in California, Illinois, Washington, Arizona and New York, said Dr. Melinda Wharton of the U.S. Centers for Disease Control and Prevention. Thirteen percent of the 140 who got sick that year were hospitalized.

“It ’s fortunate that everybody recovered,” Wharton said, noting that measles can be deadly. “If we don’t vaccinate, these diseases will come back.”

Fear of a vaccine-autism connection stems from a flawed and speculative 1998 study that recently was retracted by a British medical journal. The retraction came after a council that regulates Britain’s doctors ruled the study’s author acted dishonestly and unethically.

The new study is based on a University of Michigan survey of parents a year ago, long before the retraction of the 1998 study. However, much has been written about research that has failed to find a link between vaccines and autism. Mainstream advocacy groups like Autism Speaks strongly encourage parents to vaccinate their children.

“Now that it ’s been shown to be an outright fraud, maybe it will convince more parents that this should not be a concern,” said Freed, whose study appears in the April issue of Pediatrics, released Monday.

Some doctors are taking a tough stand, asking vaccine-refusing parents to find other doctors and calling such parents “selfish.”

A statement from a group practice near Philadelphia outlines its doctors’ adamant support for government recommended vaccines and their belief that “vaccines do not cause autism or other developmental disabilities.”

“Furthermore, by not vaccinating your child you are taking selfish advantage of thousands of other who do vaccinate their children … We feel such an attitude to be self-centered and unacceptable,” the statement says, urging those who “absolutely refuse” vaccines to find another physician.

“We call it the manifesto,” said Dr. Bradley Dyer of All Star Pediatrics in Lionville, Pa.

Dozens of doctors have asked to distribute the statement, Dyer said, and only a handful of parents have taken their children elsewhere.

“Parents have said, ‘Thank you for saying that. We feel much better about it,’” Dyer said.

The new study is based on an online survey of parents with children 17 and younger. It used a sample from a randomly selected pool of nationally representative participants. Households were given Internet access if they didn’t already have it to make sure families of all incomes were included. Vaccines weren’t mentioned in the survey invitation and vaccine questions were among others on unrelated topics.

Twenty-five percent of the parents said they agreed “some vaccines cause autism in healthy children.” Among mothers, 29 percent agreed with that statement; among fathers, it was 17 percent.

Nearly 12 percent of the parents said they’d refused a vaccine for their children that a doctor recommended. Of those, 56 percent said they’d refused the relatively new vaccine against human papillomavirus, or HPV, which can cause cervical cancer. Others refused vaccines against meningococcal disease (32 percent), chickenpox (32 percent) and measlesmumps rubella (18 percent).

Parents who refused the HPV vaccine, recommended for girls since 2006, cited various reasons.

Parents who refused the MMR vaccine, the shot most feared for its spurious autism link, said they’d read or heard about problems with it or felt its risks were too great.

The findings will help doctors craft better ways to talk with parents, said Dr. Gary S. Marshall of the University of Louisville School of Medicine and author of a vaccine handbook for doctors.

“For our children’s sake, we have to think like scientists,” said Marshall, who was not involved in the new study. “We need to do a better job presenting the data so parents understand how scientists have reached this conclusion that vaccines don’t cause autism.”