By DAVID DINSMORE
The Town Talk 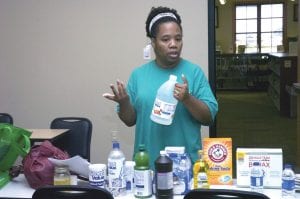 Jackie Garrison says vinegar can be used as a household cleaner and in the wash. Garrison has led workshops to teach how to make laundry detergent and other household products. She also has her own line of organic and handmade lotions, bath salts, air fresheners and more. (AP Photo/the Town Talk, Melinda Martinez)

Jackie Garrison believes in the old adage “less is more.” But when it comes to making homemade beauty and cleaning products, she says, people can have more for less.

Garrison has led workshops in her state of Louisiana to teach how to make laundry detergent and other household products. She also has her own line of organic and handmade lotions, bath salts, air fresheners and more.

It all began with a bar of soap.

About eight years ago, Garrison’s youngest child was diagnosed with eczema, she said. This led to many changes in the materials and methods her family used to raise the baby, including using cloth diapers.

Garrison joined an online group of cloth diaper users in her search for information, and there met a mother who gave her a recipe for homemade soap.

“It was a natural fit for me,” she said.

The materials and process were easy, but finding the time was a bit of a challenge, she said.

Because she didn’t want her children near the lye used to make soap, she’d whip up batches late at night. As time went on, they all noticed a change.

“The biggest difference is our skin didn’t feel like lizard skin,” she said.

Being a “retro Bohemian,” as one friend describes her, Garrison began researching other simple products she could make at home with fewer chemicals at a lower cost than commercial products.

She learned that vinegar could work as a fabric softener, dishwasher rinse agent and household cleaner. The smell fades, she says, “So your house isn’t going to smell like a pickling factory.”

Her laundry may not smell like lavender, but clothes — even those worn by her outdoors-enthusiast husband — smelled clean and were just as soft as with commercial products, she said.

“Sometimes things that make a product last longer or work faster aren’t always the best for us,” Garrison said.

She launched her own line of bath products, Oma’s Favorite Handcrafted Soaps, and began selling them online, she said.

Around the beginning of the year, Garrison decided to hold a workshop at the library in Alexandria about eco-friendly, homemade cleaners, and it was met with acclaim.

One of the workshop participants happened to be at the library researching information to help her daughter deal with her very sensitive allergies when she stumbled upon the class, Garrison said.

“She was so happy to be there at that time,” said Garrison, whose own journey into the world of homemade products began with concern for her child.

The time Garrison spends making soap, detergent and other products for her family — most of which they use for more than a month per batch — boils down to an average of five minutes per week, she said. And she finds all of her ingredients except tea tree oil while doing her regular grocery and household shopping.

Making her own products has changed her routine, but the diff erences are small and have a had vastly positive impact on her family’s life, she said.

“It’s almost a lost art,” Garrison said of soap making. “Technology is awesome, but there are casualties to technology.”

1 soap bar of any kind

Grate bar of soap and add to saucepan with water. Stir continually over medium-low heat until soap melts and dissolves.

Stir and fill a used, clean laundry soap dispenser half full with soap and then fill rest of way with water. Shake before each use. It will gel.