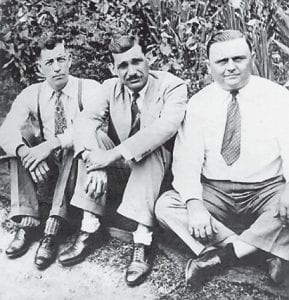 The Rev. Kernel Sexton (left) and his daughter, Emma Jean, died in an accident 60 years ago. He is pictured with Archie Craft (center) and Kirby Ison (right).

“But made Himself of no reputation, taking the form of a servant, and coming in the likeness of men.” Philippians 2:7

December is when ECCO happily welcomes friends and sponsors from outside our area to visit and fellowship with our staff and folks in the community. This month I was delighted to make the acquaintance of two new friends who came to us out of the blue.

Sherry Ahrmann from Hillsboro, Ohio, called me inquiring about ECCO and our outreach programs. She said she had made calls to folks in the county and ECCO’s name kept coming up. Sherry’s dad Obie Hughes was raised at Eolia and she called saying in memory of her dad she wanted to give something back to the community. Sherry saved coupons on personal care items, school supplies, and children’s items while enlisting the help of friends and neighbors including her dentist. Her favorite coupon was buy one, get one free.

I was touched and humbled by the kindness and thoughtfulness of Sherry and her husband Daniel, who she said she had driven crazy with this project, although it was obvious he was just as enthused as she was. Sherry had accumulated a sizable amount of items over the year, which only proves what one person can do when they have a heart for God and people.

Since ECCO began 24 years ago in the storage room of my little country store, I’ve been blessed to meet people like Sherry and Daniel who by their acts of kindness inspire and encourage all of us.

Sister Gerogianna from St. John the Baptist Catholic Church in Ohio, along with friends, delivered their annual donation of Hasbro toys to the Arlie Boggs School and stopped by ECCO for a visit. Sister Georgianna began several years ago bringing deliveries of clothing, household items and toys to ECCO, but over the years due to health issues she now makes a oneyear delivery to the school. She says delivering the toys for the children in the Eolia community is her main Christmas event. Eolia

The week ended Saturday with our annual Christmas party sponsored by the First Baptist Church of Vandilia, Ohio. The ECCO community room was packed with children and their family as Marie Coleman from the Arlie Boggs Family Resource Center handed out gifts to the children and their families. Friday evening as we unloaded the gifts I couldn’t help but notice the care that went into the wrapping of these gifts. The best of wrapping paper and large elaborate bows indicated the love that went into this project. And this is all done by a small group of elderly people.

Some of the other guests at the party were amazed that the children received as many as five gifts each. In addition to the gifts, the children also received a large stocking full of goodies and are later mailed a Bible with their name on it. Paul Swartze heads up this project and has had some major medical problems. We ask that you lift Paul up in your prayers.

At this year’s Christmas party we had an extra bonus as Marlow Tackett entertained and blessed us with his gift of music. We were happy to welcome Marlow along with friend Lester Cornett to join in the festivities. As everyone knows Marlow has his own ministry of 30 years of collecting toys for Christmas that go to children in all the surrounding counties. He is located at the old IGA building in the Walmart shopping center and if you have toys, furniture or canned foods you’ve like to share with someone this time of year, check in with Marlow. I’m sure he’d appreciate it. Lester Cornett is our contact person on this side of the mountain for Marlow’s Christmas program and is so good to make deliveries when called.

With that, I’ll leave you with this thought for the day. The measure of a man’s greatness is not the number of servants he has, but the number of people he serves.

Community Bulletin Board: Eolia Youth Group meets at ECCO each Thursday at 5:30 p.m., come join the fun. Cumberland River Volunteer Fire Department meets the second Sunday of each month 11 a.m. at the Partridge station, volunteers welcome. Partridge Lions Club meets the first and third Tuesday of each month at 6:30 p.m. at the Ovenfork Senior Citizens Center, come and bring a guest. Bible study Monday evening at ECCO 7 p.m. – all welcome.

Also lift up in prayer all those struggling with alcohol and drug addictions, may they be delivered, our military troops around the world, our president and the leaders of our country, the United States, all the children hurt by war and the ministry of ECCO.

Until next week from the folks at ECCO, God bless.