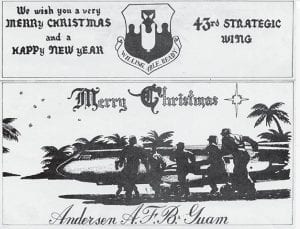 The printing of this Christmas postcard led to trouble in Guam in 1941.

December, 1971. The noncommissioned officer in charge of the print shop came into my office and showed me a Christmas card he had been ordered by the wing commander to print. It showed a B-52 with the crew running toward it and had other illustrations on it.

I knew at first glance that it was illegal for him to print them. We looked it up in the Air Force manual on printing. “No greeting cards” it said.

Showing it to the major, he said, “Print them and keep quiet about it.” They were printed, but I kept three copies of it.

This made me mad. The printer could be court marshaled for this. The major could get in trouble for his unauthorized order to print them.

I went to the inspector general and showed the card to him. He kept a copy. Late that day he told me that the colonel was going to have to repay the U.S. government $400 for the 200 cards that were printed.

The next day, the crap hit the fan. The sergeant major called me in and I wouldn’t tell him anything. He called in the printer (a good friend of mine) and he didn’t tell on me.

The major said that the colonel said he would take the stripes of the man who turned him in, as soon as he could find out who he was.

Suspecting me, the major really gave me a hard time for about a week. I stayed out of his way.

Things got so bad for me that I went to the sergeant major and told him that I had a copy of the unauthorized Christmas card, and if the major didn’t get off of my back I was going to mail it to my representative in Congress the next day.

By noon the next day the major apologized to me and left me along to do my job, “Officer of the Day.” I’m enclosing a copy of the cards with this article.

I intentionally left the names of the individuals who were involved in this story out of the article.

Born in Lexington to the late Rodney and Medra Short Hays, he died December 3 in Whitesburg.