Christmas sends thoughts back in time 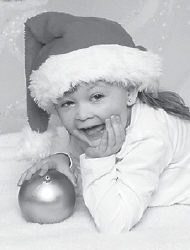 ALMOST THREE – Autumn Mullins will celebrate her third birthday on Dec. 30. She is the daughter of Jasper and Shasta Mullins of Loves Branch. Her grandparents are Arthur and Vicki Slone of Big Doubles.

Merry Christmas and happy New Year to everyone!

Can you believe another year is almost gone? We never know what the future will bring, and I guess it is a good thing we don’t.

This has been a good and bad year for me; changes have taken place as in so many other people’s lives! I am just thankful God gives me the strength to get out of bed and do all the things I need to do, the courage and knowledge not to do things that sometimes my nimble brain says to do! Like drink, smoke, and the temptation to kill! Now if I can get rid of the habit of cussing!

I don’t remember Mom (Ora Hall) ever using bad language, and the only time Dad (Clayton Hall) would say a bad word, when he had a little too much happy juice. I think I can recite everything he ever said when I get mad, and if you don’t believe me, just ask Clayton!

I have a real good reason to watch my potty mouth as little Ben is almost a year old. He is trying to mimic what you say. I tell him he stinks and he says tink!

I will tickle the bottom of little Bennie’s feet when I remove his shoes. One night he didn’t give me time. As I pulled his shoes off, he pulled his foot up and said “tickle, tickle” as plain as he could. I laughed until I almost cried at this kid! One thing about it, taking care of this baby makes you feel glad that you are alive, and want to live every day to the fullest.

There’s a station on television called Day Star. Those of you can get this, I wish you would try it. You have to get up early on the weekends, it is on when I wake up about 4:00 on Saturday and Sunday mornings. The most beautiful scenery and Christian music and Bible scriptures all combined.

Betty and Barefoot Bill Kelly’s family will need your prayers as they facing a very trying time in their lives. They recently found out their daughter has that dreadful disease called cancer!

I didn’t want to say too much before as I didn’t know how much Betty would be comfortable with me writing in my column. Their daughter is only 33 years old, has never smoked, doesn’t do drugs. She has a young son that needs her.

I know we aren’t supposed to question God, however it doesn’t seem right that some good person like this young girl can come down with something like this and some pervert can walk around healthy as a horse!

I am going to try quit complaining about my everyday aches and pains when I think of all the heartaches that other people suffer. My burdens sometimes get too much for my shoulders to bear, however I seem to mange as I am a survivor. I have been lucky my children and grandchildren are healthy. There’s a song that says what doesn’t kill you, will make you strong. I guess I have cement running through my veins along with the blood.

I shared a good laugh with Joyce Larkins of Morristown, Tenn. I told her I have a path through my living room with little Bennie’s things. Joyce reminded me of the path to the outhouse in the mountains of days of childhood. At the time of this writing, we are having some severe weather. Sort of makes you pleased there’s a little white throne and you don’t have to track to that little outhouse we called a toilet.

I bet Gladys Smith of North Carolina and Emma Engle can relate to that statement. Right, girls?

Christmas time makes my thoughts go back in time. My brother, Richie Hall, was telling me how he and Robert would go sneaking around at Christmas and find what Mommy and Daddy had gotten them, play with the toys and put them back.

When Wallace Lee and I were small, Santa brought Wallace a red wagon and me a doll. At the time Daddy and Mommy were renting from Vernon Hogg between Roxana and Hot Spot. The little white house is still there.

Wallace Lee and I wore that wagon out the following summer. We finally rode down the hillside one time too many and lost the hold on the tongue. It stuck in the ground, broke the handle, and dumped Wallace Lee and me out with a hard thud.

I got a doll that year and oh how pleased I was. I can remember one year just getting a yellow checked head scarf. I was about seven years old. I remember crying when there wasn’t anyone around.

We always had plenty of apples, oranges and candy. Dad always got that big peppermint barber pole, and I remember the coconuts. He would break them and let us kids drink the milk and then crunch on pieces of the coconut.

Dad always bought some candy I think are called bonbons. They were pink, chocolate, yellow and white, and were filled with coconut.

I remember a crate of red delicious apples and a box of oranges. We never had very many toys, but we never went hungry. Back then there was no place to beg for things like there is now!

Once again I have goofed big time. Belated happy birthday to my brother, Wallace Lee Hall,

I really pulled a good stunt. had to be somewhere early and laid my keys down on the desk

~ to pull my gloves on, and I locked my house keys along with my car keys up in the house. It was early in the morning, along with being about 15 degrees.

I tried in vain to get the door opened, hating to break a window. I called the Hamilton County Police but the officer couldn’t help me, so he called the fire department. Lucky they carry something to help. Thanks to the Harrison Fire Department for coming to my rescue!

Has anyone got a an extra gas cap that fits a ’99 Chevy Cavalier? Two weeks ago I stopped to get gas at a station, pulled away and left my gas cap again. This only makes about four times in the last couple of years I have pulled this trick! Years ago when I would find a gas cap at a service station, I would turn it in at the place. Now at $10 a cap, it seems people keep them.

The only problem, not every cap will fit correctly. If I ever get another car I will try to find one that has a gas cap that is attached!

Betty and Doyle Ison are waiting for Santa to stop by their house. Betty had a mild setback but is feeling a lot better. Doyle is sneaking out when he can and sitting on the boat dock, enjoying the beautiful scenery.

Shirley Wells of Clarksville, Tenn., and her son, Buddy Wells, will take their annual Christmas walk along the Cumberland River. Shirley really enjoys this event.

Gwen Huff Farmer will be celebrating Christmas with several of her children.

Ann and Johnny Calihan are ready for the holidays. Their daughter, Sue, has been really sick with some sort of flu. Ann wasn’t feeling well for a few days; she has bounced back fine.

I hope everyone has a very good Christmas as it will be just a memory by the time this is published!

May we all remember what the real meaning of Christmas is! It is our dear Savior’s birth! With all the gift giving, that seems to be lost in today’s world.

I hope my two special readers the Jones boys, Levine Jones and Bruce Jones, had a merry Christmas and everything on their wish list was fulfilled!

I received a Christmas card from Dover and Nadine Cornett of Richmond. Seems they let their subscription to the Eagle expire, Dover said he missed my column so they are renewing it. That is one present my daughter Kay gets me, and my youngest daughter Anna Nottingham gets me Kentucky Explorer!

To my anonymous friend: Don’t forget Old Time Fiddlers will meet Jan. 6 in the basement of the fire department at Miamitown, Ohio, 1-4 p.m. This is held the first Sunday of each month, plenty of good entertainment, good snacks and good companionship.

Once again that clock is giving me the wicked eye, saying I am watching you. So until next time!