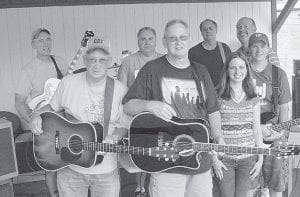 For the past two years the Jenkins Homecoming Days Festival has had one constant that has become a crowd favorite.

Chuck Johnson’s presence has given the event a level of professionalism that others may only wish for. Not only is he a hardworking and entertaining emcee, he is also a very talented singer and musician. And as a big plus, he is one of our own people.

Since losing his job as a coal miner in the late 1980s, Chuck has made his home in central Kentucky and is now employed at Toyota.

When the Jenkins Homecoming Days Festival was reorganized in 2007, Chuck called Mayor Dixon and said, “If I can be of any assistance in any way, please let me know.” When our new committee heard about his availability we jumped at the opportunity to incorporate him into the entertainment segment of the festival. It has become a perfect marriage.

I asked Chuck to give me a brief biography about his career and his new band which will perform at 8 p.m., Saturday, Aug. 29.

“I was born and raised in Jenkins. My dad, Ezra Johnson, pastored the Payne Gap Freewill Baptist Church. I grew up singing gospel music and today I love singing most all kinds of music.

“My older brothers introduced me to traditional country music. My oldest brother Frank was a big Johnny Cash and Johnny Horton fan. My older brother George is a big fan of George Jones, Merle Haggard and Buck Owens.

“Of course, I didn’t miss a single edition of the “Ozzie and Harriett” TV show just because I wanted to hear Ricky Nelson sing. I have always been an Elvis Presley fan. I have also become a huge bluegrass music fan.

“One of my favorite musicians is Larry Cordle and Lonesome Standard Time. Larry has been a personal friend of mine for 20 years. You should see all of the gold and platinum records hanging in his living room.

“I love singing many different styles and genres of music but gospel music is still my favorite. I love singing gospel because I am a born-again Christian; I know I’m not perfect, I’m just forgiven.

“One of the highlights of my personal musical career came in 1991 when I was invited to join The Renfro Valley Barn Dance Show.

“Every Friday I’d make the trip down to Renfro Valley, Ky. which is located just off I-75 at exit 62 between London and Berea. I not only did the Friday and Saturday night Barn Dance Show but I was also a featured singer on the Saturday afternoon gospel show and The Sunday Morning Gathering.

“The show was recorded and sent to radio stations across the U.S.A. and Canada. It was a great thrill for me one night after a show, when a couple came up to me and said they had come all the way from Canada to hear and meet the Renfro Valley Singing Coal Miner. That was the way I was introduced on the programs.

“I also had the pleasure and honor of working with some nice folks from Nashville. I met the legendary Jimmy Skinner at Whitaker’s Music Shop in East Jenkins one day when I was about 13 years old. He was on his way to do a show in Neon.

“I was sitting there playing on an old guitar and Mrs. Cora Whitaker asked Jimmie to let me play and sing for him. I was so nervous, but after he heard me sing he asked me to come over to Neon and be a part of his show.

“I will never forget that night. I will always be indebted to Charles ‘Slick’ Gallion of East Jenkins for letting me borrow his beautiful Gibson guitar to play on that show.

“I have also sung on the Ernest Tubb Midnight Jamboree in Nashville a couple times. The first time there I worked with Charlie Louvin. I sang ‘My Woman, My Woman, My Wife’ and Charlie sang harmony with me. Allison Krauss was also on the show.

“My second appearance on the Midnight Jamboree I got to share the stage with Red Stewart. Red was the co-writer of ‘The Tennessee Waltz.’ I also got to meet Justin Tubb, Ernest Tubb’s son.

“I was talking with Ralph Stanley II the other night, and I was telling him about doing a show with his dad years ago. I still have a cassette tape of me singing ‘Rank Stranger’ with Ralph Sr. I became personally acquainted with Ralph Sr. when I was employed at the hospital in Wise, Va. in 1973.

“Ralph’s mother, Lucy, was a patient there and he would visit her every day. I would spend my lunch period with both of them and we became good friends. When he sees me today, he still makes mention of those occasions.

“When I was growing up I played in a couple gospel music groups. I had the pleasure of working with the Florida Boys, The Happy Goodman Family, The Hinsons, Teddy Huffman and the Gems, The Primitives, J.D. Sumner & The Stamps Quartet, and The Singing Cookes just to mention a few.

“I’m really excited about this year’s Jenkins Homecoming Days Festival. In the past I sang mostly to soundtracks but this year will be totally different. I get to sing and pick with my extended family.

“My brother George will be singing and playing guitar. He is one of my earliest influences. My daughter Carmen will be playing bass guitar. She impresses me by how quickly she can pick up on a song and run with it. It’s like she can read my mind when we’re working together on the stage.

“Our new band, Chuck Johnson and Friends, has incorporated my cousins, Garry, Mark and Jimmy Tucker, and Garry’s daughter, Mallory. Folks are going to love this girl; she can sing anything she puts her mind to.

“I always loved listening to Garry play the piano. Mark and Jimmy are two of the best guitar players I ever had in my band. They also introduced me to a great drummer from Bristol, Va., Mike Meredith. He fits in so well with our family band, it’s almost like we have worked with him all of our lives.

“Last year we started talking about doing a show of family and friends for this year’s festival. Well, the first time we got together to see what we could do, I was blown away by the talent these young men and women displayed. I think the people who come out to the Jenkins Homecoming Days Festival will be pleased with our new band and our new sound. They can expect some classic country, rock, pop and gospel music.

“We have worked real hard and traveled many miles just to get to meet and practice. I especially want to thank Betty Hunsaker and Peggy and Tommy Greer for opening their homes for us to practice on numerous occasions. It is a real honor to be opening for the popular musician, Ralph Stanley II.”