Chuck Yeager is a hero 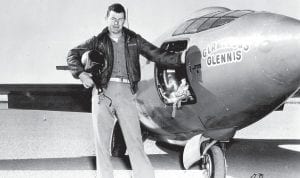 Capt. Charles E. “Chuck” Yeager is shown standing next to the Air Force’s Bell-built X-1 supersonic research aircraft after he became the first man to fly faster than the speed of sound in level flight on October 14, 1947. (AP Photo/US Air Force)

Retired Brig. General Charles “Chuck” Yeager retraced history 65 years ago as the test pilot who was the first to break the sound barrier, by taking to the skies once again to fly faster than the speed of sound.

This 89-year-old, the focal point of “The Right Stuff ” book and feature film, flew in the back seat of an F-150 Eagle for a sonic boom over Edwards Air Force Base, California. The World War II “Double Ace” hit mach 1.3 above California’s Mojave Desert. It was the same area where he first achieved the feat above Muroc Air Field, now known as Edwards AFB.

I was stationed at Langley Field, Va., in Oct. 14, 1947 as crew chief of my aircraft when then 24-yearold Captain Yeager piloted the experimental rocketpropelled

The thin-winged, bulletshaped, orange X-1 is now on permanent display at the Smithsonian’s Air and Space Museum in Washington, D.C. 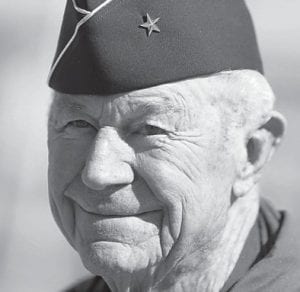 The aviation and aerospace world was never the same. The area surrounding Edwards AFB was virtually transformed overnight into a destination for the hottest test pilots who flew higher, faster and farther in the latest aircrafts of the day.

Flight surgeons from David Grand Medical Center here at Travis AFB, reviewed Yeager’s medical records and he was cleared again to surpass the speed of sound while flying at 45,000 feet above the desert in the F-150 that took off from Nellis AFB, Nevada.

Yeager said it was, “just another flight” to him.