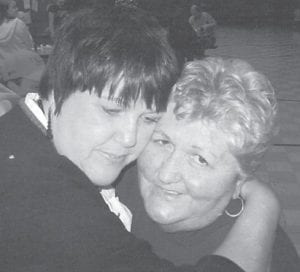 Brenda Thomas Richardson is pictured with her mother, Anne Thomas.

Hallelujah, we are getting closer to actually being able to attend services in our church buildings. We will be able to see each other and talk to each other. We have church brothers and sisters who do not have a computer or the Internet and so they haven’t been able to even listen, as we have on Facebook, all this time the church buildings have been closed. I know they will be happy to get back in the church building for services.

It will seem so odd to not shake anybody’s hand or hug them. But at least we can begin to get back to meeting together again. Some of our church members have serious health issues and may not want to risk the gathering with others and that’s understandable. From what I understand, the six feet apart has to be enforced and I think I will have my On Guard essential oil spray with me for disinfecting. As I’ve said many times before, my concern is bringing this virus in on our Mom.

I was reading on Facebook where Jo Ella Taylor Sturgill, a former Marlowe Coal Camp girl that I’ve mentioned in this column before, is still asking prayers for her husband Darrell Sturgill. It seems he was admitted at Lima St. Rita’s Hospital where they live in Carey, Ohio, this past Sunday and they wouldn’t let Jo stay with him or even go in with him to be admitted. Monday, she posted that he was feeling a lot better and will be having a heart catheter Tuesday the 12th. 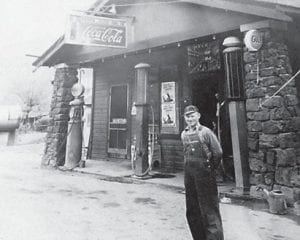 The “Fillin Station” at Marlowe Coal Camp. “We aren’t sure who the man in this picture is,” says Whitesburg correspondent Jeanette Tacket Yonts.

Also Bernadine Gibson Blair is still wanting all to pray for her daughter-in-law, Angie Blair. Bernadine’s son Josh posted that Angie was discharged from UK Monday evening and her parents took her to Duke Wednesday the 6th. There they found out it wasn’t a new brain tumor, but lots of swelling in her brain, which they will address with IV medicines every two weeks at UK. In the meantime she will still be taking her chemo pills and will return to Duke on July 2. Please keep this whole family in your prayers.

Then there’s our Little Laney Webb. It seems the whole community has adopted this special little girl and are continuing to lift her up to God for healing. It was so good to hear she is now leukemia free. This was the post from Laney’s mom, Michelle Webb: 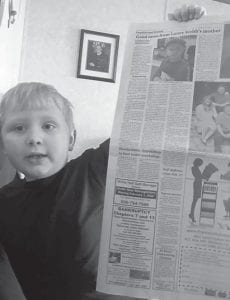 “Today Laney had an appointment and they said everything looks good!!!

“They stopped some of her meds!!

“Maybe gonna get that Pic line out of her arm in a couple of weeks!!!

Two other prayers requests are Rocky Yonts will be having cataract surgery this week on one eye and will have to return to have the other done later, and then Tim Caudill’s granddaughter is having some heart issues still and they need our prayers.

We have an incredibly young Mountain Eagle fan by the name of Jaxon Quillen. His parents are Jack and Krystal Quillen. He has an older brother named Jesse Quillen. His paternal grandmother, Maxine Bates Quillen, talks about her grandchildren all the time and tells me how much Jaxon loves to look at the paper to see if he is in there. Well, he is having a birthday on the 23rd of this month and we want to let him know how special he is to his whole family and how much everybody loves hearing Maxine tell about some of the things he does or says. When we put his picture in the paper last time he had to have Maxine take his picture with the paper over and over. Happy birthday, Jaxon, and you may actually be able to have a party this year after all.

There was a picture shared on a Facebook site called “You know you went to Whitesburg when?” The other day there was a picture shared of the “Fillin’ Station” at Marlowe Coal Camp. When Mom saw that picture, she told me about its posts made from blocks of coal and you could tell this from the picture too. She started reminiscing about how many times she had gone inside that store and bought stuff. I think it brought back a lot of memories for lots of others too. There is part of the building still standing on the property, but this part was added later. It is a block building with two garage doors facing the road. The top of it has been covered with kudzu for many years now and the top is starting to all fall in. Time sure has a way of changing things. If you are from Marlowe and have access to the Internet, you need to look at all the pictures that have been posted on the Growing Up in Marlowe Coal Camp Facebook page.

Okay, I will close out here by asking everyone to remember Brenda Thomas Richardson and all her family in the loss of her mother, Ann Sexton Thomas, on the 7th of this month. Also remember our pastor, Bill Jones, and his wife Sandy and all their family.

If your church is having services now and you are able to go, your church needs you desperately anytime the doors are open. Oma’s plea will continue to ring out every week in this column.