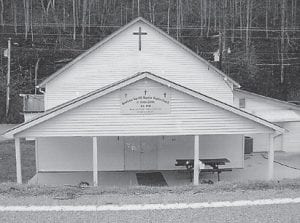 The Hurricane Gap Church at Gordon will mark its 100th anniversary Dec. 17-19.

Church services will be held at 6:30 p.m. on Dec. 17 and 18 with supper following, and at 10 a.m. on Dec. 19 with dinner following. Different preachers will speak each day, and everyone is welcome.

The church has survived many hardships — a house burned about 40 feet from the church in the 1920s, the church survived the Great Depression of the late 1930s, there was a shooting at the front door in the 1920s, and there were no church services from 1974 to 1978. The church was restarted in 1978, and has prospered ever since, especially since 2000.

In 2010 it became an independent Old Regular Baptist Church. Church services are held every Sunday at 10 a.m. and Bible study every Wednesday at 7 p.m. Charles T. Shepherd has been the moderator for 22 years, Jennings Ritchie is the assistant moderator, Charlie Shepherd is the clerk, and Doug Halcomb is the treasurer.