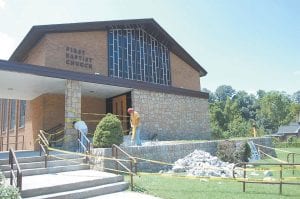 On June 7, 1964, the First Baptist Church of Whitesburg was dedicated and members created a time capsule to mark the occasion. Items placed inside the capsule included pictures and letters addressed to loved ones. 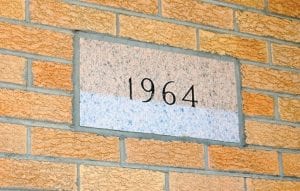 As part of its 100-year anniversary, church members on Saturday will unseal the time capsule and see what was left for them 45 years ago when the church moved from the end of Main Street to its present location on Madison Avenue.

"We just felt that the 100th anniversary would be an ideal time to open that," said Linda Bell, chairman of the church’s centennial committee. "Hopefully it will have a lot of messages in it for people in the community."

As part of the celebration church members are collecting items to place in a new time capsule on August 15 that will be left for others to find many years from now. 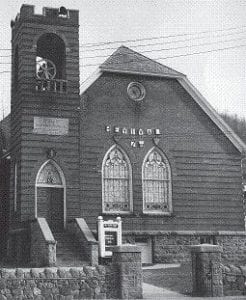 "We’d sure like everyone in the community to come," said Pastor Tony Brown. Bell is expecting a large crowd, including people who come to Letcher County from as far away as Texas.

"I’m really excited because people away from here are coming home for it," said Bell.

Dr. Jim Castlen will read a tribute to the founder of the church, A.S. Petrey. The sanctuary choir, soloists, children’s choir and praise band will perform. The church drama team will reenact the first baptism held at the church. An old-fashioned pig roast will begin at 3 p.m.

Clyde Collins, who has attended the church since 1960, will be sharing many of his memories. His first wife, the late Loraine Collins, was church secretary for 41 years before she died of breast cancer.

Collins said he worked in the church nursery with Bonnie Griffie in the 1970’s, but never changed a diaper. "One little boy told his mommy, ‘We have a Bonnie and Clyde working in the nursery,’" Collins remembered.

Collins said he still enjoys serving as a church greeter on Sundays.

"I have been so blessed by all of the people I have met in church," he said.

Sunday School will begin at 9:45 a.m. on August 16, followed by a church service at 11 a.m. Former pastor Dr. Bill F. Mackey, who led the church for 10 years begining in 1979, will deliver the centennial message.

"At the end of the dinner on Sunday our choir director, Susan Vanover, will peal the chimes and we will release balloons," said Bell.

The church was organized in Whitesburg on March 31, 1909, after a fourweek revival led by Petrey and J.B. McKeehan. The revival resulted in 35 adults being baptized in the North Fork of the Kentucky River near the Main Street bridge.

G.F. Davisson was the first pastor and A.J. Sturgill was the church clerk. Church services were first held in the courthouse before moving to the upper floor of the Lewis Wholesale building, which now serves at Whitesburg City Hall.

The first church building, which was dedicated on April 25, 1915, was located on East Main Street at the foot of College Drive on the location now occupied by Hoover’s Home Furnishings. The church contained the first indoor baptistery in the area. A three-story annex was built in 1938 with an apartment on the third floor for the pastor.

"It’s most important impact is that First Baptist Church has started 40-some mission churches throughout the county," said Brown.

Construction of the current church building on Madison Avenue was finished in 1964 at a total cost of about $400,000.

A second phase of the construction will see the completion of a family life center designed by Harbor Inc. of Lexington. The center will be connected to the church and will include a gymnasium, walking track, stage, dressing room, locker rooms, classrooms, and a ministry room.

Brown said the Letcher County Food Pantry, now located in a house next to the church, may move into the family life center.