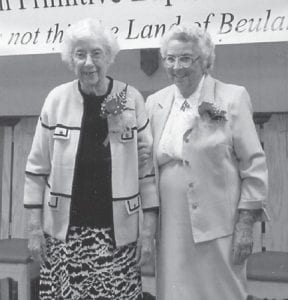 Our 100-year anniversary at the Little Cowan Primitive Baptist Church was a wonderful weekend. We had great preaching, praying, testimonies and singing by visitors and home folk.

There was an interesting review of our history and heritage.

We were glad some of our older members and some who have been sick were able to come. Many of our moved-away members and former members returned and lots of friends from other churches visited. It felt like the “good old days”.

We really appreciate our pastor and all those who worked so hard to make it a successful occasion.

Jessica Boggs has finished her first year of teaching at Clinch School near Rogersville, Tenn. She really likes that area.

Robby Brown of Myrtle Beach, visited family and friends here in Kentucky. He and Linda Combs spent half a day driving the back roads of Letcher County. They went from Pine Mountain to Kingdom Come, Dry Fork and more.

Robby’s daughter Rachel works as a research assistant in North Carolina. She has a three-yearold son, Benjamin.

Watson Combs visited his brother Bennett for several days. Attending the reunion were Liz and Gerald Looney of Ohio, and Bennett’s nephew Jonathon and Jamie and their three daughters. Several of Red and Mae Jones’s children were there. Bill, Shade, Norma Jean and Carolyn, Buck and Benny were unable to be here.

The weather was so nice and many more family and friends were there to enjoy being together.

Hello to Don Walker of Naples.