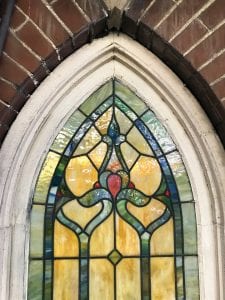 STILL HERE AFTER 102 YEARS — This stained glass church window believed to have been destroyed in 1964 was uncovered recently during a remodeling project on the top floor of the Bella Home Furnishings Building in downtown Whitesburg. The building, originally built to house Hoover’s Home Furnishings, sits on a lot formerly occupied by the First Baptist Church of Whitesburg. (Photo by Ben Gish)

A 102-year-old stained glass church window has seen the light for the first time in 52 years, after being found hidden behind a wall during a building renovation in Whitesburg.

Workers renovating the second floor of the Bella Home Furnishings building for temporary use as administrative offices of Mountain Comprehensive Health Corporation made the discovery.

The Bella building, made of concrete block and brick, was built by late Whitesburg businessman and longtime state representative Hoover Dawahare on the site of the old First Baptist Church after the church built a new building on Madison Street and moved there in June, 1964. The grand opening of Hoover’s Home Furnishings was in February, 1965.

The church building itself was torn down, but the church addition and parsonage was kept intact. As it turns out, so were two walls of the old church. The painted back wall of the building camouflages the different brick patterns where new construction joined the old brick church. 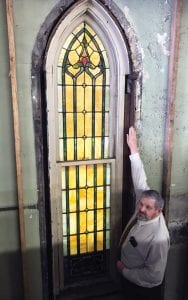 MCHC CEO L.M. “Mike” Caudill demonstrates the length of a stained glass window uncovered in a building that sits on the lot formerly occupied by the First Baptist Church of Whitesburg. (Photo by Ben Gish)

What is now used as an apartment building was built as an addition to the church and a parsonage. When the Hoover’s Home Furnish- ing building was built, the church addition was kept and tied into the new building. The bell tower on the northwest corner, the roof, west and south walls of the church were torn down, leaving the east wall facing the old Whitesburg High School, and the north wall, which connected to the parsonage.

When work began on the building to remodel it for use by MCHC, workers started tearing out a wall and found an entirely different wall underneath it. The structural brick wall is a scant four feet from the south wall of the parsonage, and window air conditioners stick out into a completely enclosed alleyway between the two. On the second floor, in what remains of the north wall of the church, workers found the arched top of a 10-foottall stained glass window.

“When they tore the paneling off, it became visible and they opened it up,” building owner Mike Caudill, CEO of MCHC, said. 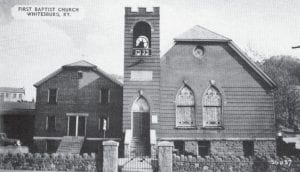 This image taken from an old postcard shows Whitesburg First Baptist Church before it was torn down in the mid-1960’s. The church was located at the corner of Main Street, Railroad Street and College Drive in downtown Whitesburg.

Further demolition uncovered the remainder of the window, perfectly preserved inside the wall. Part of the framing is missing, but the glass is complete and has no cracks. There is an opening for brickwork indicating a second window like it, but Caudill said the window itself has been removed and the opening filled with concrete blocks. Caudill said he plans to preserve the window that still exists.

The windows are in an area behind the old bell tower. Pictures of the church taken in the late 1930s and early 1940s show similar windows in the front of the building as well.

MCHC bought the old Whitesburg High School on the hill behind the building, but Caudill said that building can’t be remodeled in time to meet a deadline for the start of a new clinical education program for third- and fourth-year students of the Kentucky College of Optometry, which is run by the University of Pikeville School of Osteopathic Medicine. Instead, MCHC will move its administration offices into the furniture store building, expand its obstetrics and pediatrics departments into the old administrative offices, and make room for a clinical space for optometry as MCHC works on remodeling the interior of the old school.