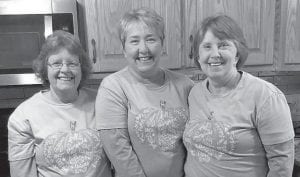 Hello everyone! Fall has officially arrived in the small area of the Ohio Valley where I live. There have been a few patches of God’s coloring book showing through.

It has only lasted a few days then the heavy rains came. I am sure most of the beauty will be gone. Well, we are getting the much-needed rain that everyone wanted and actually we needed.

Oh I don’t like the cold that has come with it. As I said before there’s no use complaining. With all the forecasting and scientific ways, I am old-fashioned enough to believe God is still in control of the weather although it does seem as if humans have taken over the world.

Thursday evening, I went on an adventure to the Express Urban Appalachian Showcase, which was held at the Arnoff Center in the big city of Cincinnati. This was the first time that anything Appalachian had been featured at Arnoff Center, also my first visit there.

First let me say what a beautiful place for this event to be held, the seats were velvet, the color of teal green. I had been very sick for a few days, so this was a last-minute decision for me to decide to go.

When I called for a ticket, I was surprised when I got to the center. I had a great seat, as I sat five rows from the stage with a clear view of the bands, which consisted of the Corndrinkers and I knew two of the musicians; Linda Scutt and Barb Kuhns; Ma Crow & Company; Jericho Old Time Band; Rabbit Hash String Band; and Bear Foot, and I am close friends with each band member.

It was the first time for me to see and hear the group Tellico, which was very impressive as it consisted of three generations. It was wonderful to see so many young ones playing so many different instruments.

To my surprise, the emcee for the event, Omope Carter Daboiku, is a storyteller at Appalachian Festival at Old Coney on Mother’s Day Weekend, where I volunteer each year. Oh yes it was a special event for me to attend this event.

Since it was a split decision for me to call for a ticket, and Vicki wasn’t home, I didn’t have time to ask anyone else, so I went alone. I parked a block away from the Arnoff Center, and Ma Crow & Margie Drees stood on the street corner and watched until I got in my car.

Dale Framer, the bandleader of Jericho Old Time Band, was very ill, however he performed great. Dale was surprised that I had driven downtown by myself. Driving in Cincinnati doesn’t bother me. If I get lost I find my way out somehow.

Through the past 25 years or more, through my love of music, I have met so many wonderful people that I can call friends. When Ma Crow knew I had come by myself, she laughed as she hugged me saying, that is my old Rose!

As I listened to the poetry reading of a few people, I felt envy as I tried to comprehend their style of poetry. If I knew the venue to go to that could be on stage.

While I was sitting in the lobby waiting for the show to start, a lady was kind enough to share her seat with me. She is from West Harrison, Ind., which is just up the hill from where I live. We shop at the same places and have never met. Her daughter was in the poetry reading group.

I really hope there are more events like this in the greater Cincinnati area.

Sunday evening, Harrison Community Center held its annual Spooktacular Event for Halloween. My daughter Angie Wiederhold is unable to walk, so I picked up my sidekick Bennie Wiederhold for a fun-filled few hours for Bennie and me.

There were all sorts of different games, two bounce houses, and what I used to call the moon bounce. Of course there were costumes of everything you could imagine.

The evening started off with people handing out candy. Bennie said let’s get in line. Luckily we weren’t that far back as there must have been a line a block long if it was stretched out.

Now there were lines at every game. I started to feel my ankle getting stiff so I had to be very careful when I would take a step, to keep my balance.

There was a pie-eating contest. Bennie came in second place as he forgot to swallow the pie. Before he could get his mouth emptied a boy beat him by a second. Every contestant got a small pumpkin. This boy was a little older and bigger than Bennie, and he came to Bennie and gave Bennie his prize. Bennie didn’t want to accept it but the boy kept insisting.

There was a hayride, which I enjoyed as much as Bennie. The hayride wagon went by the Harrison Nazarene Church, which holds a special event of its own that coincides with the Harrison Community Center’s. Several of the church members package candy to give out each year, and last year Ann Calihan was able to help. I think they passed out around 600 bags of candy.

While they are passing out candy, there’s a fire where you can roast wieners, and also chips, cookies, and soft drinks, then marshmallows to roast, to either enjoy, or make s’mores.

Bennie ate two wieners, then marshmallows, and even made s’mores, although I had to wrap the graham cracker s’mores, as he was getting full.

What I didn’t say at the beginning is that we stopped at McDonald’s before going to the community Center. Bennie had a cheeseburger, fries, and a drink.

On the way home Bennie asked me if I would make vegetable soup, as he said what I brought before was so delicious, and a lot better than the soup his mom made.

By the time I dropped Bennie off I was very tired and with a swollen ankle again.

Johnny Calihan was sitting by the fire when I first got to the church with Bennie. I forgot about it being Sunday night, and Ann was in the church so we missed seeing each other

Please keep the Calihans in your prayers, as they are struggling to go with their lives. How I wish I could ease their pain, when there’s not a thing anyone can do in this situation.

My niece Sue Hall had a fall down her porch steps injuring her legs very badly. I think she has a hairline fracture. Sue can’t seem to get a break from life’s events.

Happy anniversary to Les and Pat Wagner on Nov. 3. I really hope the two are well enough to celebrate.

Happy birthday to my youngest daughter Anna Nottingham, and to Lorretta Wells Baggett, on Nov. 3. Loretta lives in Clarksville, Tenn. Loretta and Anna are the exact same age. Loretta is Shirley Well’s daughter from Marlowe, which is just outside of Whitesburg. Shirley was friends with Oma Hatton from childhood.

Mike and Marcia Caudill spent a few days with Marcia’s sisters Raymona Caudill Bell, and Janie Caudill Klamerus in Georgia, as they attended a weeding. Everyone had a wonderful time. The Caudill girls were raised on Johnsons Fork and the old home-place is still standing.

Carcassonne Community Center Square dance will be held Nov. 9. Will Bowling is the caller, and Sunrise Ridge is the featured band. Come hungry, as there will be delicious food. This will be the final square dance of the season.

Campbell’s Branch Community Center is Friday night with the Sunrise Ridge Band. Food is served so come hungry and support both community centers.

For those in this area, the movie Mountain Minor will be shown at the Community Arts Center, 10 S. College Street in Oxford, on Nov. 17. This is a movie that you don’t want to miss if it is in your area.

Please take time to enjoy the beautiful colors of autumn, as the leaves will be gone in the blink of an eye.