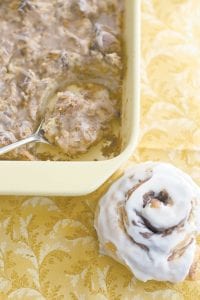 As though the candy canes on the tree and the presents under it aren’t enough, here’s an excuse to have an even sweeter start to Christmas.

Cinnamon buns were the inspiration. And while on their own they make a delicious breakfast, I wanted to take them a little further. So I chopped them up, drenched them in eggs and milk, then baked them into an insanely delicious (and simple) bread pudding.

To keep this recipe from becoming entirely heart stopping, I used fat-free half-and-half (skim milk is fine, too). If you wanted, you also could use liquid egg substitute (egg whites) to cut the fat even further.

And to help keep you focused on what really matters on Christmas morning (the presents!), this bread pudding can be assembled the night before, then covered and refrigerated. Bake as directed the next morning. Cinnamon Bun Bread Pudding

This recipe calls for 12 fully baked cinnamon buns. Get them at the bakery or in the grocer’s baking section. If you get raw cinnamon buns, bake them according to package directions, let them cool, then use them as directed in this recipe.

In a blender or large bowl, combine the eggs, half-and-half, 1 teaspoon of the cinnamon and the This bread pudding can be assembled the night before, then covered and refrigerated. Bake as directed the next morning. It uses 12 baked buns and makes enough to serve up to 12 people. (AP Photo/Matthew Mead) salt. Puree or whisk until smooth. Set aside.

Cut each cinnamon bun into 1- to 2-inch chunks. Arrange the chunks in an even layer in the prepared baking pan. Pour the egg mixture over the pieces of cinnamon buns. As you pour, use a fork to gently press on the bun pieces to help them absorb the liquid.

Bake for 25 to 30 minutes, or until lightly puffed and starting to brown. Let cool for 15 to 20 minutes.

Meanwhile, in a medium bowl whisk together the powdered sugar, water, vanilla and remaining 1 teaspoon of cinnamon.

To serve, drizzle the bread pudding with the glaze, then cut it into 12 squares.