New federal health law’s key tests in the next year 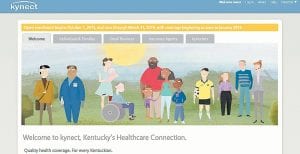 Kentucky residents use the state website kynect.ky.gov to sign up for coverage under the new health law.

The new year brings the big test of the new federal health care law: Will it work?

The heart of the law springs to life Wednesday, after nearly four years of political turmoil and three months of enrollment chaos. Patients will begin showing up at hospitals and pharmacies with insurance coverage bought through the nation’s new health care marketplaces.

The course of 2014 will show whether President Obama can get affordable care to millions of people in need, without doing intolerable damage to the 85 percent of U.S. residents who already were insured.

Lots of Americans are nervous.

Will their new coverage be accepted? It’s a concern because insurers have reported problems with the customer information they’ve gotten from the government, including missing data and duplication.

How many more people will see old individual plans that they liked canceled? Will a flood of newly insured patients cause doctor shortages? Will businesses respond to the law by ditching their group plans or pushing more health costs onto workers?

About three-fourths of people who face changes to their job-based or other private coverage in 2014 blame the health law, a recent AP-GfK poll found. Yet the trend of employers trimming costly health benefits predates the law that critics dubbed “Obamacare.”

Many people should benefit immensely.

People previously locked out of individual insurance by high prices or pre-existing health problems can get coverage to stave off the threat of medical bankruptcy. More low-income workers will come under Medicaid, in states that agreed to expand the safety-net program. Middle-class families without workplace coverage can get tax subsidies to help pay for their insurance. How much patients like the new plans, and whether they can afford the co-pays and deductibles, will become clear as they start visiting doctors.

The new year also launches the most contentious aspect of the law: the mandate that nearly everyone in the U.S. have health coverage, or pay a fine.

All this will unfold during the super-heated politics leading to November’s midterm elections.

Republicans and Democrats will jostle all year to infl uence the public’s assessment of changes to American health care not matched since Medicare and Medicaid were launched nearly a half-century ago.

— Coverage begins. Many low-income Americans who didn’t qualify for Medicaid in the past can use it now. People who signed up for private insurance in a state or federal marketplace by Dec. 24 (or later in some states) and have paid their first premium are now covered, too.

— Coverage begins for workers at companies that have signed up for new small business plans through the marketplaces, also called health care exchanges.

— Coverage lapses for people whose existing plans were canceled, if they haven’t signed up for a replacement or received an extension. At least 4.7 million people got cancellation notices, despite Obama’s promise that Americans with insurance they like could keep their old plans. Obama recently gave insurance companies the option of extending old plans for existing customers for a year, but only where state insurance commissioners give their OK.

— The clock starts on the “individual mandate.” Nearly all U.S. citizens and legal residents are required to have “minimum essential coverage” for most of 2014, or pay a penalty. Most people already are insured through their jobs, Medicare, Medicaid, or military coverage and so don’t need to do anything.

— Insurance companies are no longer allowed to turn away people in poor health or kick customers out of plans when they get sick.

— Women and people with pre- existing conditions pay the same rates as healthy men in the new plans. The law also limits how much more insurers can charge older people.

— New insurance plans can’t put an annual dollar limit on care, or require individuals to pay more than $6,350 in out-of-pocket costs per year.

Payment due. In most cases, marketplace customers who signed up by Dec. 24 have until now to pay the first month’s premium and get coverage for their January medical bills. Major national insurers agreed to accept payments 10 days into the month because of technical troubles plaguing online enrollment at HealthCare.gov. But buyers should check early with their insurance companies — some may not honor the grace period. A few states running their own marketplaces are granting even more time. Those who miss their deadline can get coverage starting Feb. 1.

— A temporary program for people denied coverage because of poor health ends. Tens of thousands of Americans with serious illnesses such as heart disease and cancer were in the special program and needed new coverage for 2014. The Pre-Existing Condition Insurance Plan, originally set to expire Dec. 31, was extended one month to help sick people whose enrollment was stymied by HealthCare.gov computer crashes.

— Some people could lose coverage for a prescription they’ve been taking. The Obama administration urged insurers to temporarily let customers keep filling prescriptions covered by a previous plan, but not their new one, through January.

— The patched-up health care website will face a major test if too many people rush to sign up in the final days of open enrollment. Watch for a possible return of rampant crashes and error messages.

— On the other hand, low enrollment signals another danger. The law’s design relies on younger, healthier enrollees to offset the cost of older and sicker consumers. If the numbers stay low, it’s likely that enrollees will be disproportionately people with more expensive medical needs, putting a financial strain on insurers. The White House set a goal of 7 million sign-ups for private coverage. More than 1 million had enrolled by Dec. 20, Obama said.

— Last chance for open enrollment through the federal marketplace or 14 states running their own exchanges. Late March enrollees will be covered beginning May 1. (It’s possible the administration could decide to extend open enrollment, if major website problems resurface and interfere with sign-ups.)

— This is the deadline for most people to get coverage to avoid a fine. The Obama administration says, however, that those whose existing health insurance was can- celed because of the Affordable Care Act will be exempt from the penalty. People who lose coverage during the year can go without for three months before facing a penalty.

— The enrollment deadline doesn’t apply to people signing up for Medicaid or the Children’s Health Insurance Program, based on income. People can apply for those programs at any time and coverage begins at once.

— The March 31 deadline also won’t stop those who need to sign up later in 2014 because of a “qualifying life event.” The events include things like getting married, having a baby, or leaving a job that provided insurance. Qualifying events trigger a special enrollment period lasting 60 days.

No worries yet. Those who go without insurance won’t owe penalties until federal taxes are due in 2015 for the previous year’s income. Tax returns filed in 2015 will include health insurance information; insurers will send notices to confirm that taxpayers were covered in 2014. People who bought plans in the marketplaces and received either too little or too much in premium subsidies during the year also will square things with the IRS in April 2015.

The midterm elections will be yet another referendum on the health care law passed in March 2010 with no Republican support. Obama will still be in the midst of his final term, however. So even if Republicans emerge with control of both chambers of Congress, they will still face two more years with Obama in the White House to veto attempts to undermine his signature law.

Open enrollment for 2015 begins. Americans can sign up for insurance or switch to a different plan. And they’ll see what rate increases are in store for the coming year.

— The extension ends today for people who were able to keep their old individual plans for an extra year, even though the coverage wasn’t up to the law’s minimum standards.

Jan. 1: Large employers — those with more than 50 employees — that don’t offer health plans face a possible tax penalty. The penalties are designed to discourage businesses from dropping their existing health plans, although some have already begun to do so.

April 15: Penalties for individuals who weren’t insured in 2014 kick in. The penalty is $95 or 1 percent of income, whichever is higher. It goes up in later years. The IRS can deduct the penalty from a taxpayer’s refund.

So- called “ Cadillac health plans” offered by some employers come under a new tax. It hits plans that spend more than $10,200 per worker or $27,500 for a family. Most job-based coverage isn’t that generous, but corporate executives get such plans, and so do some workers in jobs with strong union contracts. Some companies will pass the tax on to workers and others may trim employee benefits to avoid it.