CITED BUT NOT FINED 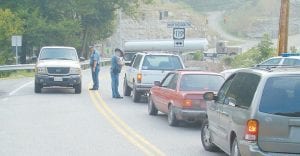 Whitesburg City Police conducted traffic checks early Monday morning in an effort to identify city residents and workers with jobs in the city who are delinquent in purchasing their annual city vehicle stickers. Although several citations were issued Monday, Police Chief Scott Adams said fines for those citations will be forgiven if the offender purchases the required sticker. Adams said the exonerations became necessary because of confusion over who must comply with the law, which has been in effect since 1970. Adams said the police department has a goal of “100 percent compliance” with ordinance, and that future violators will be fined. As a convenience to workers and citizens who still haven’t bought their sticker, City Hall is now open during lunch (noon until 1 p.m.).