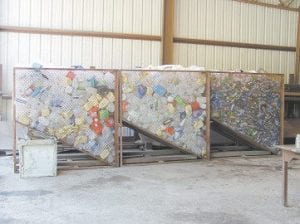 RECYCLING HAS INCREASED in Letcher County, according to Gary Cornett, county recycling coordinator. Pictured above are bins of milk and water jugs as well as detergent containers and plastic bottles.

Letcher County residents are recycling almost twice as much as they did last year, according to Gary Cornett, county recycling coordinator.

He said the center has also collected 143 tons of scrap metal and appliances.

Cornett said the more people recycle, the more money the county saves by not sending recyclable materials to a dump.

This year the center has collected $17,484 from recycling companies in exchange for the materials and has saved $12,787 in fees it would cost to send the materials to a dump, according to Cornett.

“Every ton we don’t have to pay dumping fees on is savings for us,” said Letcher County Judge/Executive Jim Ward.

Ward said the money the county saves from recycling trash is being put back into the recycling center.

Cornett credits getting the word out about the recycling center to the recent success it has had with residents recycling more items than they have in the past.

“Most of it is to do with advertising and going to all the city council meetings and getting the cities on board,” said Cornett.

Whitesburg Mayor James Wiley Craft said the amount of recycling has greatly increased since Ward has made the recycling center more accessible to all of the cities in the county.

“The big thing is getting the recyclables from Whitesburg, Neon and Jenkins,” said Ward.

Cornett said about 150 “blue bags” are collected from Whitesburg every Wednesday evening. He said Jenkins and Neon put their items in recycling bins, making it hard to keep track of how much is collected from week to week, but he did say the cities are contributing a decent amount of recyclable items to the center.

“I would like to get more people in Whitesburg recycling from an economic standpoint as well as from an environmental standpoint,” said Craft.

Craft said people should be more conscious of the environment.

“The bottom line is that it is an environmental issue. We don’t need to drown in our own garbage. That is the primary reason everyone should recycle,” said Craft.

Cornett said going around to elementary schools in the county and stressing the importance of recycling and not littering has also contributed to gathering more recyclable items.

“I’d say they have an impact on their parents,” said Cornett.

“You use the same amount of bags you would normally use. You just separate the materials,” he said.

Ward said if a household usually has four bags of garbage, three of those four bags could be full of recyclable items.

Residents whose garbage is picked up by the county or by the City of Jenkins can sit their blue bags filled with recyclable items out with their normal trash. Blue bags are picked up in Neon on Tuesdays and in Whitesburg on Wednesdays.

Cornett said once the blue bags are dropped off at the recycling center, the two fulltime employees, one part-time employee, and three inmates from the Letcher County Jail stay busy separating the recyclable items.

“We have to sort all of these blue bags and recyclables by hand,” said Cornett. “It’s been so busy with all this paper to separate and the blue bags and the appliances.”

The county accepts the following items for recycling:

+ Number 1 and Number 2 plastics such as soft drink and water bottles, clean milk and water jugs, and bleach and detergent jugs

In addition to having a county recycling center, Ward is hoping to add a place that will recycle used tires.

Ward said he is in the process of getting a tire recycling center in the county which could create 10 to 12 jobs.

He said the county would be able to recycle automobile tires which would be made into rubber chips to be used around playgrounds and on walking tracks.

“It would be the only one of its kind in the state,” said Ward.