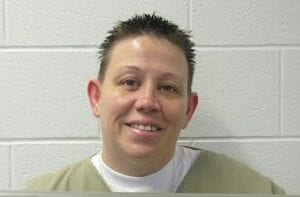 Letcher Circuit Court was scheduled to hear a motion Wednesday on whether to let convicted murderer Stephanie Yvonne Fleming out of prison because of the danger of COVID-19.

Fleming pleaded guilty and agreed to testify against her lover in the murder of her husband, 32-year-old Dradrick Lance Fleming, in 2012. She is now asking that her sentence be suspended and that she be placed on probation, home incarceration or some other form of release.

Mrs. Fleming pleaded guilty March 10, 2014, in Letcher Circuit Court to complicity to capital murder under aggravated circumstances, complicity to first-degree arson, complicity to kidnapping, criminal complicity to tampering with physical evidence and first-degree hindering prosecution or apprehension. She is serving a life sentence at the Kentucky Correctional Institute for Women at Peewee Valley.

Mrs. Fleming filed the motion pro-se (without an attorney) in late July. The motion is a form with blanks for personal details such as name, address, and other information.

In the motion, Mrs. Fleming claims that she “has tested positive for the COVID,” and that requiring her to stay in prison where she cannot follow precautions required outside of prison is cruel and unusual punishment under the Eighth and Fourteenth Amendments.

“I am serving a life sentence for a crime I did not commit. And the person James Maggard … that actually committed the crime said I had nothing to do with this crime,” she wrote in blanks provide in the motion. “In eight years our story never changed. I have always maintained my innocence and now I tested positive. I am scared of not being able to get better.”

But, by pleading guilty to the crime, Mrs. Fleming agreed with the prosecution’s description of what occurred.ffat description says Maggard, who was having an affair with Mrs. Fleming, beat Dradrick Fleming with a baseball bat on June 20, 2012, outside the Flemings’ home at Millstone and then placed Mr. Fleming in his own pickup truck which was later burned and pushed over a mountainside on a strip mine near Franks Creek at Eolia.

Mrs. Fleming admits in the agreement that she was present when the beating took place and that she did nothing to assist her husband, helping Maggard instead to clean up evidence of the beating.

The agreement also says that Mrs. Fleming knowingly “allowed” Maggard to take the pickup truck carrying her badly beaten husband to a site on Black Mountain, where Maggard set the truck on fire with Mr. Fleming inside. His charred remains were found three days later. An autopsy revealed he had been doused with an accelerant and set on-fire while he was still alive.

Maggard entered an Alford Plea to the charges, precluding any chance that he could be sentenced to death. In entering the plea, Maggard maintained that he was innocent of the murder, kidnapping and arson charges against him, but admitted that enough evidence existed that a jury could-find him guilty.

Ison had gone to mortuary school and had worked at a funeral home. Police alleged that he had heard Mrs. Fleming and Maggard talking about a plan to kill her husband, and told them that a body would have to be burned at 1,500 degrees Fahrenheit to reach the cremation stage that would keep the cause of death from being known. Ison maintained that he thought they were joking.