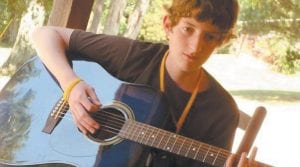 FIGHTING FOR HIS LIFE — Travis Morton, 15, of Jeremiah is in a Cincinnati hospital battling stage four brain and spinal cancer. Members of his family have been touched by the way Letcher County citizens have been working to raise money to help meet his expenses.

While a 15-year-old Jeremiah teenager is battling a rare form of cancer at a Cincinnati hospital, residents in Letcher County are busy raising money to help pay his medical bills.

Travis Morton, a sophomore at Letcher County Central High School, was recently diagnosed with stage four brain and spinal cancer. His family is astonished at how much support Letcher County residents have shown in the last few weeks.

“People are showing compassion without knowing him,” said John Morton. “They are digging deep down in their pockets to give and it amazes me and renews my faith in man. I know there are good people in the community.”

Travis’s grandfather, Roland Brown Sr. of Doty Creek, has been overwhelmed by the number of people who have wanted to organize fund-raising events for his grandson. 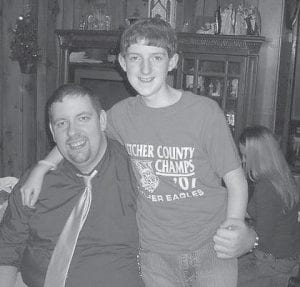 Travis Morton, 15, posed for this photograph with his uncle, Roland Brown Jr. Morton is in a Cincinnati hospital battling brain and spinal cancer.

WXKQ 103.9 radio station hosted a radio-thon Nov. 6 in which $16,000 was pledged and $4,000 was raised selling hot dogs in front of the Letcher County Courthouse that same day.

“They took it and ran with it,” said Brown. “I can never say thank you enough.”

Kevin Day, general manager and programmer of WXKQ 103.9, said he knew most of the people who called in pledges and he estimated that 97 percent of the pledges were from Letcher County residents.

“I know that Letcher County people are giving people and willing to help their neighbors in any way they can,” said Day. “I have seen that happen many times over but to this extent I could never imagine. It really shows how close knit we are and supports the idea that we take care of each other.”

Day said he thinks many people gave donations because a child is involved and because Travis has had a wide reach already.

“He is a special young man that has touched people already,” said Day. “He was one that many people know and know his family and realize they are good people that really could use the help.”

Day said that he doesn’t personally know Travis but had heard of him through the social-networking site Facebook and other people throughout the area.

“During the fund-raiser I realized how many people had stories about Travis and his impact in the community,” said Day. “He is a strong young man that is facing this awful disease a lot better than most adults could.”

The radio station streamed the radio-thon over the station’s website, allowing Travis to listen to the entire show right from his hospital bed at Cincinnat i Children’s Hospital.

“Travis was able to hear the words of encouragement,” said Brown. “It was heart wrenching for people to do this.”

“The outpouring from the kids at the high school was fantastic,” he said. “Different kids broke into their piggy banks and brought money.”

At least $7,000 was raised Nov. 7 at a day-long event at Campbell’s Branch Community Center at Linefork.

“So many people have worked so hard,” said John Morton.

He said he could not name all of those who have helped raise funds.

Ruth Brown, Travis’s grandmother, said she was amazed by how much money was raised by the community.

“It just renews my faith in the community,” said Ruth Brown. “They come together when tragedy strikes.”

Travis underwent surgery at the University of Kentucky Hospital and radiation and chemotherapy in 2004 when he was a fourth-grader at Letcher Elementary School.

“He was 90 pounds when they found the tumor and was 41 pounds when he finished radiation and chemotherapy,” said Roland Brown Sr. “He lost half of his body weight.”

He said his grandson had stem cells that never developed and became cancerous in his brain and spine.

“They told us in 2004 if it came back it would come back with a vengeance,” said Ruth Brown. “He now has multiple tumors on his brain and spinal column.”

Travis spent a few days at the UK Hospital before being transferred to the Cincinnati Children’s Hospital.

“At UK they told us it was terminal,” said Ruth Brown. “Cincinnati thinks they can prolong things. Of course, what we pray for is a miracle every day. At this point we just take it day to day.”

Thursday will make three weeks that Travis has been a patient in the Cincinnati hospital.

“They are working on it aggressively to see if they can get it under control to give him some quality of life,” said Roland Brown Sr.

She said Travis was frustrated because doctors were talking to his parents about his health but weren’t consulting him before making decisions. Now Travis is making his decisions for himself.

“I think that is awful brave for a 15 year old,” said Ruth Brown. “We’re following his lead.”

She said her grandson is more mature than most teenagers because he has been through so much fighting cancer. She said Travis told his mother not to cry when he found out the cancer came back.

Travis started taking guitar lessons in 2004 to strengthen his hands after he finished chemotherapy.

“His dream is to play with a band on stage,” said Ruth Brown.

Another dream of Travis’s is to buy a Dodge Challenger like his guitar teacher Travis Fields, who is a teacher at LCCHS.

Travis Morton is an avid reader.

“He enjoys listening to anything and everything,” said Ruth Brown.

She said he doesn’t have the endurance to play sports.

“He’s not really a cut-up but he has a good sense of humor,” said Roland Brown Sr. “All in all he is just a good kid.”

“He is an amazing young man with a strong faith in God and really close with his family,” said John Morton. “Travis is a kind-hearted gentle soul. He is tenderhearted.”

John Morton said his son has strength beyond imagination.

“He is going to fight and he does each day,” said John Morton. “We put our faith in God and hope each day.”

Travis’s mother is Melody Morton who is a registered nurse at the Hazard hospital. Travis has a seven-year-old brother, Ryan.

Funds has been set up at both Community Trust Bank and Whitaker Bank for those who want to donate money for Travis and his family.

Soup bean dinners will be held at 11:30 a.m. and 7 p.m. on Nov. 20 at the Blair Branch Church in Jeremiah. Each dinner is $5 and all proceeds benefit Travis Morton.