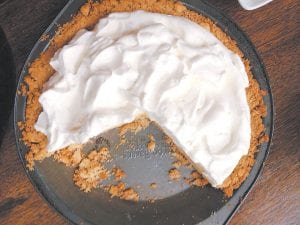 The beauty of this Atlantic Beach Pie lies in the play between the salty, dense crust made from soda crackers and the creamy sweet-and-tart filling featuring citrus juice. (Katie Workman via AP)

This Atlantic Beach Pie recipe comes from Bill Smith, long-time chef of Crook’s Corner restaurant in Chapel Hill, North Carolina. When I first tasted it, I went into a pie-induced trance. I have a fuzzy memory of finishing the pie, sharing it with my dinner companion, forks nudging each other for the final bites.

Atlantic Beach Pie was commonly served at seafood restaurants on the North Carolina coast when Smith was growing up. He told me that back in the day, there was a commonly held belief that if you ate sweets after a seafood meal you would get sick. The exception was this citrus pie, the only dessert served at many of these coastal seafood joints.

It was often served with meringue on top (no doubt using the white from the yolks that are used in the filling), but Bill prefers it with whipped cream, and I am not about to argue.

The beauty of this pie lies in the play between the salty, dense crust made from soda crackers and the creamy sweet-and-tart filling featuring citrus juice. To crush the crackers, you can use a food processor, or even your hands, but the easiest and least messy way is to put them into a sturdy, gallonsize, zipper-top bag, press out the air, seal it, and hit it with a rolling pin or other blunt object until they are crushed.

This is now one of my family’s favorite pies, and I have made it part of my life’s work to share it with as many people as I can. It’s a good story, but it’s an even better pie.

For the Crust: 1 1/2 sleeves of Saltines 8 to 10 tablespoons unsalted butter, softened 3 tablespoons sugar For the Filling 1 (14-ounce) can sweetened condensed milk 4 large egg yolks 1/2 cup fresh lemon juice or lime juice, or a mix of the two

Preheat the oven to 350 degrees Fahrenheit.

For the crust, crush the crackers finely but not to dust, and place them in a medium bowl. Add the sugar, and then knead in the butter until the crumbs hold together like dough. Press the mixture into an 8- or 9-inch pie pan, as you would for a graham-cracker crust. Refrigerate for 15 minutes, and then bake for 16 to 18 minutes or until the crust colors a little.

Remove the crust, and while it is cooling slightly, make the filling. In another medium bowl, beat the egg yolks into the milk, then beat in the citrus juice. It is important to completely combine these ingredients. Immediately pour into the pie shell and bake for 15 to 18 minutes until the filling has set. Let the pie cool on a pie rack, then refrigerate.

In a large mixing bowl, using a whisk or hand-mixer, whip the cream and confectioners’ sugar just until slightly firm peaks are formed. Pile the whipped cream over the entire filling.

The pie needs to be completely cold to be sliced. This will keep for up to 4 days in the refrigerator.