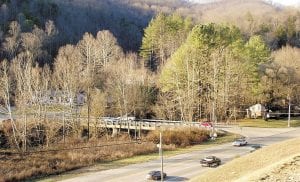 BEING EYED FOR ANNEXATION – The area of Ermine shown in this photo taken from near the Letcher County Central High School is among several locations that will be surveyed for purposes of annexation by the City of Whitesburg.

The City of Whitesburg will soon be growing larger.

At its January meeting last week, the Whitesburg City Council approved the hiring of Letcher County Surveyor Richard Hall to survey an area between Pine Mountain Junction and Ermine in preparation for it being annexed into the city.

Craft said the area includes the Pine Mountain Grill and an area beyond the restaurant that will include the Letcher County Central High School and a home and business located at the mouth of Craft’s Colly Road’s junction with Old U.S. 119.

Craft told the council that portions of Solomon Creek may also be annexed by the end of summer.

In other business at the January 9 meeting, the question of demolishing one of Whitesburg’s older existing historical buildings was put to the city council by representatives of the Letcher County Conservation District.

Ron Brunty, who was representing the district, told the council that the estimated cost of restoring the old KYVA Motor Company building, which Mayor James Wiley Craft said was built in the 1930s, would exceed $4 million, and that he hoped the council would grant the Conservation District permission to demolish the structure and build a less expensive headquarters for their offices. The building is next to the future site of the Letcher County Health Department, which will be built in harmony with other structures in the Historical Preservation District.

Mayor Craft told Brunty he had placed a ban on demolishing historical buildings in order to protect the interests of the city, and that the council would have little say in when or whether he lifts the current moratorium. Craft said the Conservation District would have to follow the established procedure to get a building permit and go through City Building Inspectors Truman Thompson and Gary Mullins. Thompson is also Whitesburg Fire Chief and Mullins is Assistant Fire Chief.

Brunty told the council the original estimate to restore the building was based on a cursory examination and that contractors had informed him that the entire metal infrastructure of the building was “rotten” and might not even support a new roof. Craft told Brunty he would have to go through the process and submit building plans to Thompson and Mullins in order to proceed. Council member Perry Fowler, a longtime member of the Planning and Zoning Commission, told Brunty the city has a system in place and that either Mullins or Thompson would be available to guide the district through the process.

Mayor Craft told the council he was shocked last summer when he attended a Conservation District meeting and learned that one contractor had already been awarded a bid to demolish the KYVA building. Brunty said the bids had been exploratory in nature and he hadn’t intended to actually follow through with the demolition. Craft said the historical value of the building is great and will be factored into any decision the city makes regarding the structure. Craft also cautioned Brunty that the lot on which the building sits is also owned by the Conservation District and badly needs to be cleaned up.

In other business, the council heard good news about Whitesburg’s newest source of revenue. After the council voted unanimously to purchase a new dump truck, complete with a snow plow and other accessories for $13,500, Mayor Craft told the council the city has enough money on hand to pay for the truck with cash. Craft said the cash was generated by the alcohol tax created when the city voted last spring to allow limited alcohol sales at some restaurants in the city. Craft said that as of last week the city had earned $24,000 in alcohol tax revenues, some of which was also used to pay for new Christmas decorations.

Mayor Craft also announced that the Whitesburg Skate Park is complete and ready for skaters. He said the city is in the process of posting a plaque with the names of city council and fiscal court members who worked to make the skate park a reality. The park is a joint project of the Whitesburg City Council and the Letcher County Fiscal Court. Craft and council member John Williams also expressed their thanks to city workers for going the extra mile in working to make city streets passable during the recent snows and low temperatures. Craft said that due to the extreme cold, salt had little effect on the ice and city workers had to use chemicals to start the process of melting the ice before salt would take effect.

Kevin Howard of Summit Engineering, project engineer for the city/county waste water plant, told the council that construction has begun and concrete has been poured at the site. He said the foundation pour should be complete by the end of the week. Howard also discussed plans for a proposed widening of KY 15 at Maple Street and the necessity of moving city water lines for the project. Mayor Craft said the city intends to move the lines “in house” and use city workers and equipment to accomplish the task. Howard also discussed how funds will be drawn down and allocated for the wastewater project. Craft reminded Howard that the contract calls for the use of as much local labor as possible.

Benny Hamilton of KRADD said he is responsible for administering the local hiring part of the contract and as soon as hires are made he will inspect the company’s list to insure that local low income workers are given as many opportunities as possible. Craft said the after the fact approach isn’t particularly satisfactory but Hamilton said it is the only way he can actually monitor hiring. Howard added that while the company will likely use its own crews to do skilled work, unskilled labor will be primarily hired locally.